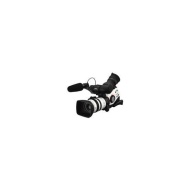 alaTest has collected and analyzed 10 reviews of Canon XL2. The average rating for this product is 4.2/5, compared to an average rating of 4.0/5 for other Camcorders for all reviews. People are impressed by the design, whereas the usability and viewfinder get critical opinions.

We analyzed user and expert ratings, product age and more factors. Compared to other Camcorders the Canon XL2 is awarded an overall alaScore™ of 78/100 = Good quality.

Below is a list of reviews for this or similar products. If you think this grouping is wrong please click here to flag.
Read more on our FAQ’s page.
Showing 1 - 8 of 8 Show Reviews: in English | in other languages (2)

n early July, Canon video unveiled the long-awaited XL2 to the press in New York. This camera is the successor to the XL1 and the XL1S.

A suitable model for professionals

The XL1 holds special significance for the DV-based filmmaker, corporate video producer, enthusiast or documentary maker. It was as revolutionary as Adobe Photoshop or the Mac Classic for delivering creative power without enshackling you with its...

It's a bit heavy and could do with a bit more padding where it rests on your shoulder. Camera is complicated and takes effort to get used to all the features - a comprehensive user manual would be very useful (could do with some "how to" details.

Definitely a great camera especially if you like to record indoors, but not as ideal for outdoors, so if that's what you're after then look elsewhere. It has lots of features and even though it is a bit costly, it's a fantastic product. :)

Native 16:9, there is a changeable lens, it has a pro look, it's very sleek and an amazing product. It is extremely professional, and was even used to film 28 Days Later, among other things.

It looks a bit like an alien, it's weight can be a bit annoying sometimes, and it only takes SD cards.

It is very good product for the value, it will give the same quality as the pro-cameras gives you

Not perfect, but the best miniDV camera ever made, and with the advent of HD(V) will remain the best. Currently still being manufactured, and now available at prices competitive with top range consumer videocams.