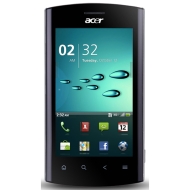 alaTest has collected and analyzed 291 reviews of Acer Liquid Metal / Acer Liquid mt. The average rating for this product is 3.7/5, compared to an average rating of 4.1/5 for other Cell phones for all reviews. Reviewers really like the social networking functionality and screen. The portability and size also get good feedback. Many are less positive about the camera and usability. Views about the reliability and design are different.

Below is a list of reviews for this or similar products. If you think this grouping is wrong please click here to flag.
Read more on our FAQ’s page.
Showing 1 - 44 of 61 Show Reviews: in English | in other languages (223)

71% of the reviews on Amazon.co.uk give this product a positive rating.

Acer may not be a huge player in the North American smartphone market, but it has slowly been improving its game, and it's had some measure of success

Solid design and build quality ; Some innovative features ; Acer UI can be switched off

Acer’s Liquid mt has a few strong points but more drawbacks, making it a tough sell with so many solid Android phones available for the same price or less.

The Acer Liquid Metal has a very decent price for an Android 2.2 handset with second generation Snapdragon chipset – the same one that is in the T-Mobile G2 and its HTC Desire Z version – as well as 512MB RAM/ROM, and some perks like Dolby Mobile, LED...

Acer has finally managed to release its much awaited & previously announced “Acer Liquid Metal” mobile phone in India at a price of INR 20,500/-. The code name has been shorted to “Liquid Mt” [...]

Here is a screenshot:

Acer makes its second shot at Android with new hardware and software.

Breeze UI hurts as much as it helps ; Bundled apps are often redundant or poor ; Poor photography in any less than ideal conditions ; Call quality a step down from the Liquid E

DesignWith a casual look, you'd be forgiven for thinking the Liquid Metal was last year's Liquid E. In some senses, that's not far off the mark. The shape is still the familiar, rounded candybar with four touch-sensitive navigation buttons. Wh

The new addition to the Acer Liquid series, the Acer Liquid Metal sports a slightly revamped exterior and a new Breeze UI. After making a comeback last year into the smartphone scene with its first Android-based Acer Liquid, will its new Android 2.2...

The Acer Liquid Metal is definitely a contender in the Android world. It's rockin' a 3.6 inch touchscreen, Android 2.2, 5 MP camera, and an 800 Mhz processor.

Acer's Liquid Metal has a good screen and fast processor, but how does it stack up against the Android smartphone competition?

Despite the thick bezel making it look small, the screen actually measures 3.6 inches across the diagonal and its resolution is very good at 840 x 480 pixels, so text in the web browser looks very sharp even when zoomed out a bit and pictures and icons...

Acer's follow up to the Stream brings Android 2.2, but dials back the specs slightly.

Acer has stuck with the same UI as the Acer Stream for the new Acer Liquid Metal, and if you hated it before, you'll probably still hate it. But the Liquid Metal costs £299 SIM free, while the Stream costs £329 as we write.

The Acer Liquid Metal continues the work of the Acer Liquid and the Acer Stream that we've seen previously. Both handsets have impressed, but lacked the overall wow factor that strong rivals from HTC or Samsung have. With the Liquid Metal, have Acer...

So overall the Acer Liquid Metal is a good device. We’re impressed with the level of customisation that Acer have undertaken - it makes it distinctive with the added addition that if you want to revert back to standard Android you can in a flash.

Acer has been in the mobile game for quite some time now but truth be told, I've not been too impressed with what they've had to offer. Their Liquid series of Android powered devices, while definitely good looking had issues with overall functionality...

With a price tag of Rs. 20,990 (MOP), the Liquid Metal had the potential to be quite a competitor for the Motorola and Samsung handsets available in the same range. Although it’s got a lot to offer, like its predecessors, it just lacks the...

Liquid Metal by Sergio Gutierrez SG Antique Silver...
This is a stunning and silky ball chain mesh necklace in antique silver finish. It is handcrafted by... $193.00 TO SHOP