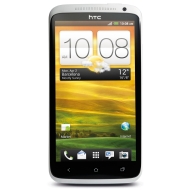 alaTest has collected and analyzed 4739 reviews of HTC One X / HTC One XT. The average rating for this product is 4.0/5, compared to an average rating of 4.1/5 for other Cell phones for all reviews. Reviewers really like the portability and size. The screen and usability also get good feedback, whereas the social networking functionality and GPS navigation get mixed opinions. Many are negative about the connectivity and battery.

We analyzed user and expert ratings, product age and more factors. Compared to other Cell phones the HTC One X / HTC One XT is awarded an overall alaScore™ of 88/100 = Very good quality.

Below is a list of reviews for this or similar products. If you think this grouping is wrong please click here to flag.
Read more on our FAQ’s page.
Showing 1 - 1980 of 2958 Show Reviews: in English | in other languages (1739)

Amazon.co.uk review summary for HTC One X / HTC One XT

alaTest has collected and analyzed 273 user reviews of HTC One X / HTC One XT from Amazon.co.uk. The average user rating for this product is 4.1/5, compared to an average user rating of 4.1/5 for other Cell phones on Amazon.co.uk. Reviewers really like the design and usability. The portability and screen also get good feedback, whereas there are some negative views about the social networking functionality and reception. There are some mixed reviews about the GPS navigation.

Amazon.com review summary for HTC One X / HTC One XT

alaTest has collected and analyzed 1697 user reviews of HTC One X / HTC One XT from Amazon.com. The average user rating for this product is 3.6/5, compared to an average user rating of 3.8/5 for other Cell phones on Amazon.com. People really like the design and portability. The screen and usability are also mentioned favorably. The connectivity and reception get negative comments, while there are some mixed opinions about the battery.

71% of the reviews on Amazon.com give this product a positive rating.

HTC One X for AT&T US review: Xtra flavor

With its international sibling receiving accolades left and right, it is time for the AT&T exclusive, LTE sporting HTC One X to take the stage. While the newcomer has retained the gorgeous looks of the global version, it is yet another case of...

The AT&T version of the HTC One X has plenty going for it. The smartphone is just as beautiful and well put together as its global sibling, yet still manages to outperform it on almost every occasion. Comparisons aside, the Sense UI 4.0 offers...

HTC One X for AT&T review

...More InfoHTC One X reviewHTC One X exclusive to AT&T in the US, brings LTE, Beats, ICS and Sense 4 to Ma BellAT&T HTC One X

Is AT&T's One X really better than the global model? Yes. If you can live with the carrier's software tweaks, this is the best subsidized Android phone in the US today.

How about this for a rebound after a rather quiet second half of last year? A massive change of game plan sees HTC focus on a few special products instead of trying to create a smartphone for every taste. An outstanding result of this effort, the HTC...

So that's that then - our look at HTC's latest attempt at bringing comprehensive smartphone functionality under one roof is complete and we have to tell you we are pretty impressed with it. The One X is not only surprisingly compact for its screen size...

More InfoHTC One X hands-on at MWC 2012 (video)HTC Sense 4 reviewHTC One S reviewIt's been a difficult year for HTC. After several

Battery life not as good as the One S

Buying an HTC One X is a lot like getting a unicorn: it's wild, fast, white, beautiful, expensive and fickle. Still, it gives even the mighty Galaxy Nexus a run for its money.

The HTC One is still the most elegant Android phone on the market, even if AT&T stuffed it with bloatware.

So much bloatware. UltraPixel camera creates problems with cropping and zooming.

Comparisons and Conclusions We're ladeling praise liberally over the HTC One, so why doesn't it get our Editors' Choice award? After seeing the Samsung Galaxy S 4, that device scores just a little bit better than the One thanks to its lighter weight,...

The HTC One X is one of the best smartphones on the market, and the best Android phone you can buy right now, period.

A beautiful, powerful phone. Fantastic camera. One of the best displays on the market. AT&T’s network is fast in 4G or 3G speeds. Sense 4 isn’t as good as stock Android 4, but it’s the best alternative out there

HTC’s signature protruding camera lens will get scuffed and scratched over the life of a two-year contract. Beats Audio makes music sounds louder, but not better. AT&T exclusivity is a shame

With Ice Cream Sandwich, a stunning screen, and fast AT&T LTE, the HTC One X takes its place as the king of all Android smartphones—for now, at least.

May be too large for some hands. No voice dialing over Bluetooth.

Other nice features: HTC adds a Car Mode, which displays a beautiful landscape home screen with large icons for easy access while behind the wheel. This includes the free Google Maps Navigation, as well as icons for making calls, streaming Internet...

It's been a long time since it first debuted at Mobile World Congress in February, but HTC's flagship Android phone is finally here. The $199.99 HTC One X may not feature quad-core power , though with a feature-packed camera, connection to AT&T's...

Quad-core processing isn't everything, and AT&T's new $199.99 HTC One X proves it. This advanced Android has style, speed, blazing 4G, and power galore.

HTC One X Review: Beautiful, But Not Without Its Shortcomings

The HTC One X is a fantastic phone, providing you can overlook its flaws. For some, the below-average call quality will most likely be a deal-breaker. For others, the One X's weak audio recording capabilities and inclusion of bloatware will be what...

Price comparison for HTC One X / HTC One XT

HTC One A9 Factory Unlocked Smartphone, 32GB, 4G LTE...
For USA Buyers : This Smartphone is compatible/will work with any GSM Networks such as AT&T, T-Mobile. For... $163.00 TO SHOP

HTC One (M7) 32GB Black - AT&T
The HTC One is ready to reshape your smartphone experience with a live home screen that streams all of your... $139.00 TO SHOP