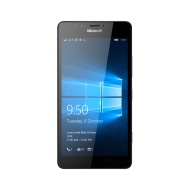 alaTest has collected and analyzed 1447 reviews of Microsoft Lumia 950. The average rating for this product is 3.8/5, compared to an average rating of 4.1/5 for other Cell phones for all reviews. Reviews about the reliability and portability are on the whole positive. The size and performance are also appreciated.

We analyzed user and expert ratings, product age and more factors. Compared to other Cell phones the Microsoft Lumia 950 is awarded an overall alaScore™ of 89/100 = Very good quality.

Below is a list of reviews for this or similar products. If you think this grouping is wrong please click here to flag.
Read more on our FAQ’s page.
Showing 1 - 74 of 549 Show Reviews: in English | in other languages (310)

alaTest has collected and analyzed 35 user reviews of Microsoft Lumia 950 from Amazon.co.uk. The average user rating for this product is 4.3/5, compared to an average user rating of 4.1/5 for other Cell phones on Amazon.co.uk. Opinions about the camera and screen are overall positive. The performance and usability are also mentioned favorably. Comments are divided on the durability, while many are less positive about the battery and reliability.

91% of the reviews on Amazon.co.uk give this product a positive rating.

alaTest has collected and analyzed 29 user reviews of Microsoft Lumia 950 from Amazon.com. The average user rating for this product is 3.5/5, compared to an average user rating of 3.8/5 for other Cell phones on Amazon.com. Reviewers really like the design and price. The portability and usability also get good feedback. Opinions are divided on the reception. Some have doubts about the battery and reliability.

69% of the reviews on Amazon.com give this product a positive rating.

Mini review video: Our verdict on the Lumia 950 in about a minute

Engadget's review of Microsoft's Lumia 950 was so controversial that a few of you sent hateful Twitter DMs to our author (tsk, tsk, guys). Still, as much as we hate to disappoint our readers, we need to stand our ground on this one: While Windows 10...

That said, it has promise: Continuum and Windows Hello are both innovative features, and the concept of universal apps for mobile and the desktop will be even more impressive once there's a larger selection of optimized apps. Windows 10 Mobile is worth...

Microsoft Lumia 950 review: Not a flagship, but a first step

After years of misguided attempts at mobile, Microsoft is ready for a fresh start. While Windows Phone 8 and 8.1 mostly just looked like their desktop counterparts, Windows 10 Mobile aspires to something even more substantial. This time, Microsoft...

Windows 10 Mobile isn't there yet ; Expensive for what it is ; Design doesn't feel like a flagship's ; App support is still lacking

The Lumia 950 is the first phone to run Windows 10 Mobile, a revamped software platform that aims to make Windows Phones do more than ever before. Both have promise -- the former with its great camera andsuper high-res screen, the latter with stand-out...

DPReview smartphone reviews are written with the needs of photographers in mind. We focus on camera features, performance, and image quality.

Microsoft combines Windows 10 Mobile, its amazing Continuum technology, and an excellent Lumia camera into the first flagship smartphone it's produced in many months.

Most will probably buy the larger Lumia 950XL ; Windows Hello is less effective than on Surface tablets ; Some noticeable bugs mar the experience

The Lumia 950 is one of the first phones to combine Windows 10 Mobile, Windows Hello, and support for Continuum, along with the traditionally strong Lumia cameras.

That's why it pains me to see the Windows 10 update in the Lumia 950 fall so short of its promise. The hardware itself is fine, if disappointingly uninspired. But the software, especially the buggy new Continuum feature that's supposed to let you turn...

Windows phones still have a huge app deficit compared to iPhone and Android. The 950's standout Continuum feature is buggy and cumbersome, and requires separate hardware to use. The phone's ho-hum design feels dated.

The Lumia 950 is a mostly average smartphone, giving iPhone and Android users no reason to switch, and offering little appeal outside Windows phone diehards.

I have a soft spot for Windows on phones. Something about the clean, simple interface appeals to me as an alternative to the relative clutter of Android and Apple's iPhone, and chats I've had with Windows phone fans do make me believe that there are...

Windows phones still have a huge app deficit compared to iPhone and Android. The 950's standout Continuum feature is buggy and cumbersome, and requires separate hardware to use. The phone's ho-hum design feels dated.

The Lumia 950 is a mostly average smartphone, giving iPhone and Android users no reason to switch, and offering little appeal outside Windows phone diehards.

It's probably been a long time since a Microsoft smartphone has crossed your mind. The last time Microsoft had a high-end Windows smartphone in the US, it was nearly two years ago and the phone...

Price is too high for what it is ; Cheap materials ; Boring design ; Weak app support

The Lumia 950 smartphone shows how Microsoft can integrate the mobile and desktop experience, but it also shows how the company is way behind iOS and Android in third-party support.

Comparisons and Conclusions I've had so much fun writing this review in Continuum mode with a big monitor, using a wired keyboard and mouse just like I was at my desktop. It's a smoother, easier experience than even on the iPad Pro, because Microsoft...

Slow leader. With the Lumia 950 and its sister model Lumia 950 XL, Microsoft has renewed its Windows Phone flagship models. They are powered by the latest Windows 10 OS. The appearance is restrained, but the equipment is worthy of a top model. Our...

design too plain for a flagship ; mixed battery life ; non-available apps in the store

Microsoft's Lumia 950 is a decent smartphone with state-of-the-art equipment and without major shortcomings. The SoC is sufficiently fast for all applications and, for the first time in a smartphone, the installed Qualcomm Snapdragon 808 does not...

Today we're having our first look at the Microsoft Lumia 950 on the review bench, showing you just one - perhaps the most compelling - feature of the bunch: Continuum. When Microsoft first created Windows Phone, it wasn't any secret that they wanted...

Microsoft Lumia 950 Dual-SIM 32GB 4G/LTE Smartphone...
For USA Buyers : This Smartphone is compatible/will work with any GSM Networks such as AT&T, T-Mobile. For... $829.00 TO SHOP