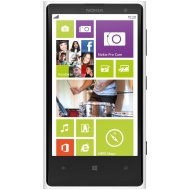 alaTest has collected and analyzed 3048 reviews of Nokia Lumia 1020. The average rating for this product is 4.2/5, compared to an average rating of 4.1/5 for other Cell phones for all reviews. Views about the portability and size are overall positive. The performance and usability are also appreciated. Reviews are divided on the apps.

We analyzed user and expert ratings, product age and more factors. Compared to other Cell phones the Nokia Lumia 1020 is awarded an overall alaScore™ of 88/100 = Very good quality.

Below is a list of reviews for this or similar products. If you think this grouping is wrong please click here to flag.
Read more on our FAQ’s page.
Showing 1 - 1230 of 1753 Show Reviews: in English | in other languages (1177)

alaTest has collected and analyzed 184 user reviews of Nokia Lumia 1020 from Amazon.co.uk. The average user rating for this product is 4.2/5, compared to an average user rating of 4.1/5 for other Cell phones on Amazon.co.uk. Reviewers really like the portability and design. The performance and usability also get good feedback, but some have doubts about the reliability.

alaTest has collected and analyzed 1028 user reviews of Nokia Lumia 1020 from Amazon.com. The average user rating for this product is 4.2/5, compared to an average user rating of 3.8/5 for other Cell phones on Amazon.com. People really like the design and portability. The performance and usability also get good feedback, but many are critical about the reception. There are mixed views on the apps and reliability.

86% of the reviews on Amazon.com give this product a positive rating.

alaTest has collected and analyzed 8 user reviews of Nokia Lumia 1020 from Amazon.ca. The average user rating for this product is 4.0/5, compared to an average user rating of 3.9/5 for other Cell phones on Amazon.ca. Reviewers really like the social networking functionality and screen. The performance and camera are also mentioned favorably, but there are some mixed reviews about the usability. Some have doubts about the size.

75% of the reviews on Amazon.ca give this product a positive rating.

The Lumia 1020 is the best Windows Phone we've used so far and offers the best camera in the industry, though it's a little difficult to hold comfortably.

Awkward and slightly uncomfortable to hold ; Has a few bugs

We've been waiting a long time for the 808 PureView to get a Windows Phone counterpart with the same (if not better) imaging prowess. Finally, it's here. Now that we've had the opportunity to use the device, we can confidently say that the Lumia 1020...

Their Windows Phone endeavors may have not been all smooth sailing for Nokia, but the Finnish company finally came up with the smartphone to beat - the Lumia 1020. Combining the best of both worlds - solid smartphone experience and an unrivaled camera,...

With its 41-megapixel camera and creative photo controls, the slim-for-what-it-is Nokia Lumia 1020 will hook avid photographers.

A niche device, the Lumia 1020 is $100 pricier than most high-end smartphones. The lens makes it a little bulky. Multiple camera apps are confusing. It lacks manual f-stop control and presets for common shooting scenarios.

Michael Homnick The Nokia Lumia 1020 faces an uphill battle: Not only is it competing against heavyweights such as the Galaxy S4 and iPhone 5, but it is also fighting against the stigma surrounding the Windows Phone OS. The Lumia 1020 is an excellent...

That’s a Big Camera You Got There

The big, circular bump on the back of the Lumia 1020 is impossible to miss. Place the phone on a table and it rests at an angle, slightly propped up by the protrusion. Hold it in your hand and you're always fondling the circle's edges. But the phone's...

At 11PM last Friday night, Yankee Stadium exploded. I had been in section 209 for about two hours when Justin Timberlake started the first verse of Frank Sinatra's "New York, New York." The...

Big and awkward ; Photography ecosystem is weak ; Hard to get at full-size photos

A remarkable phone, hampered by its operating system

The first viable 41-megapixel camera phone, the Nokia Lumia 1020 for AT&T is an impressive feat, but it's big, expensive, and doesn't run Instagram.

Big. Expensive. Slow shot-to-shot times. Windows Phone is out of the mainstream for photo apps and communities.

A niche device, the Lumia 1020 is $100 pricier than most high-end smartphones. The lens makes it a little bulky. Multiple camera apps are confusing. It lacks manual f-stop control and presets for common shooting scenarios.

No optical zoom lens (as with most smartphones) ; Shot to shot delays and shutter lag is problematic ; Start-up to first photo recorded is slower than average for smartphone cameras ; Touchscreen isn't a full HD resolution model ; Display has only 15:9...

You've probably seen the commercials for the Nokia Lumia 1020 on TV. It's the Windows smartphone with like a trillion 41 megapixels that gives parents the ability to sit at the back of an school auditorium where instead of getting close to take...