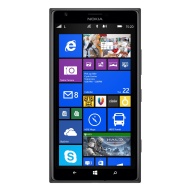 alaTest has collected and analyzed 1930 reviews of Nokia Lumia 1520. The average rating for this product is 4.3/5, compared to an average rating of 4.1/5 for other Cell phones for all reviews. Reviews about the portability and screen are on the whole positive. The performance and size also get good views, but there are mixed views on the reception and reliability.

We analyzed user and expert ratings, product age and more factors. Compared to other Cell phones the Nokia Lumia 1520 is awarded an overall alaScore™ of 89/100 = Very good quality.

Below is a list of reviews for this or similar products. If you think this grouping is wrong please click here to flag.
Read more on our FAQ’s page.
Showing 1 - 979 of 1268 Show Reviews: in English | in other languages (211)

alaTest has collected and analyzed 164 user reviews of Nokia Lumia 1520 from Amazon.co.uk. The average user rating for this product is 4.6/5, compared to an average user rating of 4.1/5 for other Cell phones on Amazon.co.uk. People are impressed by the performance and size. The screen and usability are also appreciated, whereas there are some critical views about the reliability.

94% of the reviews on Amazon.co.uk give this product a positive rating.

alaTest has collected and analyzed 797 user reviews of Nokia Lumia 1520 from Amazon.com. The average user rating for this product is 4.3/5, compared to an average user rating of 3.8/5 for other Cell phones on Amazon.com. Reviewers are impressed by the camera and portability. The performance and screen also get good views. There are some critical reviews about the reception and reliability.

88% of the reviews on Amazon.com give this product a positive rating.

alaTest has collected and analyzed 8 user reviews of Nokia Lumia 1520 from Amazon.ca. The average user rating for this product is 4.6/5, compared to an average user rating of 3.9/5 for other Cell phones on Amazon.ca. Reviewers really like the camera and performance. The screen and battery are also mentioned favorably.

The Nokia Lumia 1520 is just like the rest of the premium Lumia smartphones we've seen, but bigger and faster. The advanced imaging and the custom app selection by Nokia will make the difference against Android phablets...

Can be uncomfortable to hold ; 6-inch display may be too big for some

The Lumia 1520 offers a Windows Phone experience unlike any we've seen before. With its top-notch hardware, fantastic imaging and constantly improving firmware, this is by far our favorite WP8 device.

Phablets demand a certain level of commitment from their users. Straddling the line between a smartphone and a tablet also means having to deal with inherent trade-offs that come with these larger-screened devices — things like reduced pocketability...

The Nokia Lumia 1520 is a gigantic smartphone with an excellent camera, but it's just plain too much phone for most people.

Camera's rather slow. Comically huge. In the end, just a big phone.

Obviously, the camera is a big deal here. So let's get to that.

Bigger isn't always better, but in Nokia's case, it is. The 6-inch Lumia 1520 for AT&T is the fastest Windows Phone ever made. Slimmer and lighter than you'd expect for a supersize handset, the 1520 brings home the goods: a huge 1080p HD display, a...

Nokia's Lumia 1520 delivers a large, glare-fighting screen, a fast processor, plenty of storage, and a strong 20-megapixel camera for the same on-contract price as a smaller premium phone.

Its size makes one-handed operation difficult, and call quality was muddier than on most Nokia phones. Limited voice dictation and voice assistance in the OS hobbles its usefulness as a phablet.

Though it lacks some features found in its big phone rivals, the Nokia Lumia 1520 is a great buy for Windows Phone fans seeking a supersize smartphone with premium hardware.

Three years ago, Nokia shipped over 110 million smartphones worldwide. None had a display larger than 3.5 inches. Today the company moves far fewer smartphones, every single one of them with a...

The Nokia Lumia 1520 is a upper tier Windows smartphone designed to work with the AT&T cellular network. It can be purchased with or without a two-year contract. It boasts a 2.2GHz quad-core processor, 2GB RAM, a ginormous (technical term) 6.0-inch...

Phablets have been on the rise over the past few years as companies have been scrambling to catch the category Samsung essentially created when they released the Galaxy Note back in 2011. Since then, we've seen phablets from LG, HTC […]

You're to blame for the vast Nokia Lumia 1520 . "Make a phablet" we kept asking Nokia, "give us a big Windows Phone to compete with the Galaxy Note." That Nokia - and Microsoft - went off to the drawing board and returned with a hand-dominating 6-inch...

There’s a big market for big phones. Samsung’s Galaxy Note 3 and its predecessors have shown us that, and the gradually increasing size of the average flagship handset’s display suggests the rest of the market has caught on. The Lumia 1520 has seen...

Lumia 1520 Review: Easily One Of The Best

I've used a number of different phones throughout my smartphone journey. From the HTC Dash to my current iPhone 6 Plus, the Blackberry 8700 and the Nexus 5 I've covered most everything out there. While I had a taste of Windows Mobile with the HTC Dash...

Design is well done and construction is top notch. 1080p display is crisp and competitive. Windows native apps integrate well with the OS

Third-party apps need some fostering, not as mature as iOS and Android. Camera is good but 20 megapixel camera equally competes with iPhone and high end Androids

Microsoft has some work to do to get a high adoption rate for Lumia. I seriously would consider jumping to Windows Phone if Microsoft cultivated its app developers better. If you live outside the Google ecosystem the Lumia 1520 is something you should...