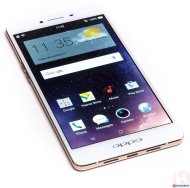 alaTest has collected and analyzed 37 reviews of Oppo R7s. The average rating for this product is 4.3/5, compared to an average rating of 4.1/5 for other Cell phones for all reviews. Reviewers really like the usability and camera. The price and performance also get good feedback.

We analyzed user and expert ratings, product age and more factors. Compared to other Cell phones the Oppo R7s is awarded an overall alaScore™ of 87/100 = Very good quality.

Below is a list of reviews for this or similar products. If you think this grouping is wrong please click here to flag.
Read more on our FAQ’s page.
Showing 1 - 24 of 24 Show Reviews: in English | in other languages (11)

The Oppo R7s looks as sleek as an iPhone 6S and has a pretty decent camera to boot.

The phone is expensive given its specs, and performance is only on par with much cheaper midrange phones.

Software and Conclusions The R7s runs Android 5.1 Lollipop with Oppo's heavily customized Color OS 2.1 UI, drawing more influence from Apple's iOS than from Google's Material Design. All of the apps are arranged on the and there is no app drawer. The...

Does the latest mid-range offering from OPPO prove to be a good choice? We find out, in this comprehensive OPPO R7s review.

The Oppo R7s provides a larger screen, larger battery, and even improves its previously already beautiful and premium design. Even with its mid-range specs and feature-packed software, what you get here is a fast, smooth, and overall fun experience.

Oppo's beautiful gold-colored aluminum R7s (it also comes in silver) looks more like a premium phone than its humble midrange innards would suggest, and it unfortunately costs more than other phones with similar specs.

The phone is expensive given its specs, and performance is only on par with much cheaper midrange phones

Oppo R7s is a a good-looking phone that ultimately isn't worth the price.

The Oppo R7s looks as sleek as an iPhone 6S and has a pretty decent camera to boot.

The phone is expensive given its specs, and performance is only on par with much cheaper midrange phones.

With phones hitting well and truly past the thousand dollar mark, the mid-range is now the attractive area to price a device, and with a tag of $529 outright and a decent spec sheet, Oppo's R7s may well offer some of the best value out there.

Metal body; Two SIMs or one SIM and a microSD upgradeable slot; 4GB RAM makes the phone perform quite well;

No fingerprint sensor; Oppo’s “ColorOS” Android overlay is still a little too iOS for us; Camera could be better; MicroSD expansion disappears if you use nanoSIM;

It was only a matter of time before the rose gold fad spread to Androids, and this one packs a couple of premium features for a mid-range price.

Some might find the pink a little ; pink ; ColorOS is not very innovative ; Mid-range processor is not as fast as the competition

An affordable phone with premium trimmings that'll do the job for people keen on carrying a slick device around.

OPPO premiered R7s, at GITEX 2015 in Dubai today. R7s smartphone inherits the metal unibody design of the R7 series, and is equipped with an ultra-large 3070 mAh battery

Oppo device came into the picture just around 2 years ago.in order to get enter into the indian market they focused on camerq specially.oppo device always contains a killee camera , it's design is also awesome, but one thing I did not like in this...

Verified by SanFlash Ultra SanDisk 200GB Works for...
✅;【VERIFIED AND GUARANTEED】 Designed to work specifically for your OPPO R7s SmartPhone by SanFlash-TM. They... $59.00 TO SHOP

tzdasheng Compatible Replacement LCD Screen and...
Please select the accessories suitable for your mobile phone according to the product title and picture. $67.00 TO SHOP