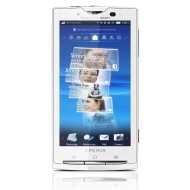 alaTest has collected and analyzed 3710 reviews of Sony Ericsson Xperia X10. The average rating for this product is 3.7/5, compared to an average rating of 4.1/5 for other Cell phones for all reviews. Opinions about the design and camera are on the whole positive. The performance and size also get good views, whereas there are some critical opinions about the text input and reception.

We analyzed user and expert ratings, product age and more factors. Compared to other Cell phones the Sony Ericsson Xperia X10 is awarded an overall alaScore™ of 87/100 = Very good quality.

Below is a list of reviews for this or similar products. If you think this grouping is wrong please click here to flag.
Read more on our FAQ’s page.
Showing 1 - 590 of 2211 Show Reviews: in English | in other languages (1457)

alaTest has collected and analyzed 407 user reviews of Sony Ericsson Xperia X10 from Amazon.co.uk. The average user rating for this product is 3.6/5, compared to an average user rating of 4.1/5 for other Cell phones on Amazon.co.uk. Reviewers are impressed by the screen and size. The performance and portability are also mentioned favorably. Many are less positive about the reception, and there are some mixed comments about the reliability.

73% of the reviews on Amazon.co.uk give this product a positive rating.

alaTest has collected and analyzed 173 user reviews of Sony Ericsson Xperia X10 from Amazon.com. The average user rating for this product is 3.6/5, compared to an average user rating of 3.8/5 for other Cell phones on Amazon.com. People really like the usability and portability. The performance and screen are also mentioned favorably, but comments are divided on the camera.

74% of the reviews on Amazon.com give this product a positive rating.

With a large high-res screen, a Snapdragon CPU and ample amount of RAM the XPERIA X10 is nothing short of the top-end Android smartphones currently on the market. However its outdated Android OS...

We've already published a pretty exhaustive review of Sony Ericsson's Xperia X10 some five months ago, but it's taken until this month for it to reach

Runs Android 1.6, no upgrade for a while ; Custom UI still lags, no multitouch ; Too pricey given competition

Sony Ericsson have been working on the X10 for quite a long time, taking the utmost care to make sure its software offers the best user experience possible. They wanted... Retested image and audio quality based on latest firmware

No DivX and XviD video playback ; No smart dialing ; Limited storage available to the user on the system partition (you are left with only 512 MB for installing apps) ; No secondary video-call camera (or videocalling whatsoever) ; No free GPS...

Androids just keep coming and a look at our front page will tell you any newcomer will need big ideas to make a splash. The popularity of Google's mobile OS is reaching unprecedented levels and the handsets adopting Android grow in number every day....

Of the world's largest phone manufacturers, perhaps none has taken a more twisted road to smartphone ubiquity than Sony Ericsson. It began its journey back in...

At least in the US, Sony has yet to create a blockbuster smartphone on par with the Samsung Galaxy S4 or Google Nexus 5 . With the Xperia Z1S, its latest flagship handset, the company makes a brave attempt at a smoother sail in American waters, but a...

The Sony Xperia Z1S has a striking, waterproof design, a fast processor, and a feature-packed camera that takes quality pictures.

The Xperia Z1S is the most impressive smartphone Sony has ever sold on any carrier, but an inferior screen makes Samsung's Galaxy handsets better deals.

Sony's Newest Android Phone Is a High Dose of Can-...

With the kinks ironed out of early versions of its latest smartphone and custom Android skin, Sony Ericsson's Xperia X10 finally reveals itself to be a

Nice camera, even including face recognition and a variety of camera modes. Impressive audio quality and loudness, if you're one of those people that still talks on his phone

The Xperia X10 impresses with a slick design and a great camera, but its lack of multitouch and its adoption of an outdated version of the Android OS prevent it from challenging other high-end Android phones for best in show.

Editors' note: Portions of this review were taken from our review of the unlocked Xperia X10. We adjusted the score of this review on August 18, 2010, to reflect additional testing.

The Sony Ericsson Xperia X10 has a user-friendly design with a brilliant display. The feature set is generous, the internal performance is fast, and call and data quality are satisfactory.

The Sony Ericsson Xperia X10 runs Android OS 1.6. The Timescape application has its faults, and you must use a third-party app for Outlook calendar syncing.

The Sony Ericsson Xperia X10 offers a slick, user-friendly design with a solid feature set and good call quality. We lament, however, that the device is stuck on Android 1.6.

Conclusions A 1 GHz-class phone shouldn't feel slow. It's that simple. But Timescape makes Motorola's much-derided MotoBlur look feather-light. Timescape drags down the phone's performance in service of some ugly icons and jittery animations. And stuck...

The Sony Xperia X10 is an ideal multimedia and messaging smartphone for anyone who doesn't plan on making many actual voice calls.

The Sony Xperia X10 is a powerful high-end multimedia smartphone, but it's not a very good phone and it should feel faster.