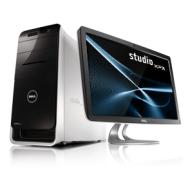 alaTest has collected and analyzed 82 reviews of Dell Studio XPS 8100. The average rating for this product is 4.1/5, compared to an average rating of 4.1/5 for other Desktops for all reviews. Reviewers are impressed by the size. The design is also appreciated. Reviews are divided on the reliability. There are some less positive views about the price.

We analyzed user and expert ratings, product age and more factors. Compared to other Desktops the Dell Studio XPS 8100 is awarded an overall alaScore™ of 86/100 = Very good quality.

Below is a list of reviews for this or similar products. If you think this grouping is wrong please click here to flag.
Read more on our FAQ’s page.
Showing 1 - 10 of 30 Show Reviews: in English | in other languages (48)

The Dell Studio XPS 8100 is an affordable performance desktop aimed at people seeking an all-around capable system that doesn't necessarily need tinkering with. Priced at $1429 (as of February 1, 2010), it comes with a Core i5-750 processor, 8GB of...

Adding a touch of sophistication to the more affordable Inspiron lines, Dell's Studio segment offers an option to mainstream users who want a little more - without having to spend the cash on an Alienware.

The Studio XPS 8100 is Dell's second entry into the Studio XPS 8000 series of desktops, and the fourth in their Studio XPS line overall. It sits in an interesting place compared to the rest of Dell's lineup: it isn't part of the value-oriented Inspiron...

Choosing more powerful components quickly drives up the price, no monitor included in base bundle

The Dell Studio XPS 8100 is a well-priced, mid-range desktop PC for home usage. It doesn't have the strongest specifications -- you'll have to pay significantly to add extra performance through Dell's customisation options -- but it will handle almost...

The Dell Studio XPS 8100 is a mid-range, all-purpose PC aimed at home users. It has a Core i5-650 processor, 4GB of DDR3 RAM, 1TB of hard drive space and an NVIDIA GTS 240 graphics card as standard. Dell's site allows you to customise the system's...

A somewhat middling performer, suited to power users but lacking the oomph to make it something special

After owning the Dell Studio XPS 8100 Desktop for about 5 months, the system starting indiscriminately but regularly stalling and freezing - to the point where it was not usable at all. Then I found a TON of complaints online about the XPS having this...

Dell Desktop Computer's are my friend ”

I have owned many different brands, and kind of took my cue with the Dell from my parents. They are now on their second Dell, and no problems. I too am now on my second Dell. The first I will admit was kind of rocky in the beginning but worked out all...

I have had this computer for nearly a year now and never have any problems.  It is one of the best on the market.

One of the fastest computers that I have ever used ”

The Dell Studio XPS 8100 desktop computer is the fastest computer that I have ever used. I installed a lot of applications on this computer, and the computer did not slow down at all. I love that the RAM can be upgraded up to 16 GB. You can choose from...

Bought the XPS 8100 core7 a couple months ago.  Everything I was looking for over my old Dell I've had for 9 years.  RIP Windows XP.  Looks like the case may be a little hard to open, but I'll have to deal with that when the time comes.  Very satisifed...

Dell 3-prong AC Adapter - Power adapter - 130-watt...
Stop lugging your AC adapter back and forth between home and office. Get a second AC adapter for your... $88.00 TO SHOP