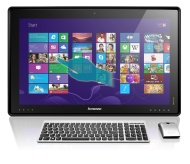 alaTest has collected and analyzed 57 reviews of Lenovo IdeaCentre Horizon 27. The average rating for this product is 4.0/5, compared to an average rating of 4.1/5 for other Desktops for all reviews. People really like the reliability. The design also gets good reviews. The size and price get negative reviews.

We analyzed user and expert ratings, product age and more factors. Compared to other Desktops the Lenovo IdeaCentre Horizon 27 is awarded an overall alaScore™ of 87/100 = Very good quality.

Below is a list of reviews for this or similar products. If you think this grouping is wrong please click here to flag.
Read more on our FAQ’s page.
Showing 1 - 55 of 56 Show Reviews: in English | in other languages (1)

alaTest has collected and analyzed 30 user reviews of Lenovo IdeaCentre Horizon 27 from Amazon.com. The average user rating for this product is 4.0/5, compared to an average user rating of 4.0/5 for other Desktops on Amazon.com. Reviewers really like the design and usability, but there are some negative comments about the size and reliability. There are some mixed comments about the price.

Who would have thought that, rather than hybrid laptops or Windows 8 tablets, the most interesting new hardware trend in computers for 2013 would be tabletop PCs? That's an unofficial term I use to describe the growing number of systems that straddle...

The large screen and lie-flat design make the Lenovo Horizon 27 a fun family PC with lots of casual gaming potential. It includes several gaming accessories and has a custom user interface, Aura.

The heavy, clunky kickstand can get in the way, there's a little sluggishness with some of the software, and battery life is way too short for a game of Monopoly.

Tabletop PCs may not be fully ready for the mainstream, but this coffee-table-size version from Lenovo is fun to use, and doubles as a solid all-in-one desktop.

The Lenovo IdeaCentre Horizon 27, "Table PC" as they call it, is easily one of the most unique PCs we've seen in the past several years. This machine works with a massive display that sits on a hinge holding it up - or allowing it to lie flat - for...

In the Lenovo IdeaCentre Horizon 27 you’ve got what’ll almost certainly continue to be one of the most solid “odd” computers on the market. Microsoft’s push for uniqueness in Windows 8 hardware has definitely made it’s mark on the hardware landscape –...

As both a giant tabletop tablet and a family all-in-one PC, the $1,500 Lenovo Horizon 2 delivers. The machine's innovative Aura interface makes the Table PC fun for everyone, and its bright, full HD display and Core i5 processor work admirably when...

The Lenovo Horizon 27 is a versatile and family-friendly all-in-one with entertaining apps, but the fun comes at a high price.

The latest all-in-ones look a lot like huge tablets, right? An internal battery adds portability to Lenovo's 27” IdeaCentre Horizon, but is this cool concept still functional as a desktop, or does the push toward mobility sacrifice too much performance?

Step into a world where tablet gaming takes over a full table and users get a real dice to throw, stickable joysticks and air hockey controls. From arcade style games to tablet top games like Monopoly and Texas Hold ‘Em, here’s a look at gaming on the...

There are times when computer manufacturers go a bit bonkers just because they can. The Lenovo IdeaCentre Horizon falls into one such category. Or at least

A novel mega tablet that's both fun and fast, but it's far too expensive

Our main concern, though, is the price. The novelty factor certainly adds a lot to the overall cost, but at £1,600, you could buy two Dell XPS 18s and still have money left over. Otherwise, we’d recommend the Best Buy winning Acer Aspire 7600U.

I wouldn't buy until more people have tried this thing out to see how common the malfunctions are.

I wouldn't buy until more people have tried this thing out to see how common the malfunctions are.

Beautiful machine with innovative features and nice specs. Customer service helpful Has WiDi and HDMI in

Great, while it lasted.

I loved this PC. I would carry it to the living room to play family games, my office or kitchen table to do work. Put it on my dresser to watch Netflix at night. Wish it still worked.

Awesome! Great in table top mode. Huge display screen. Allows me to really get work done. Monopoly has never been so much fun, can finish a full game with 4 players in 2-2 1/2 hours. Love the performance. This PC changed my opinion of Windows 8, it...

After 6 months it doesn't boot or turn on, or do anything. I can still use it as a monitor running from my laptop, but no touch screen. Wish Windows 8 had more apps native to the system. Sometimes it seemed buggy. Doesn't have a second output for dual...

CB2 """Cosmic Horizon with Light Wood Frame 27...
"""This piece by artist Prxedes Tercero draws inspiration from the concept of white space, both as it... $273.00 TO SHOP

Ballard Designs "Summer Storm Stretched Canvas 27""...
A storm may be on the horizon, but it's still a beautiful summer day in this lushly colored impressionistic... $361.00 TO SHOP