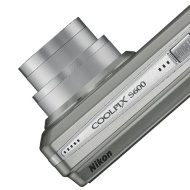 alaTest has collected and analyzed 112 reviews of Nikon Coolpix S600. The average rating for this product is 4.1/5, compared to an average rating of 4.3/5 for other Digital Compact Cameras for all reviews. Reviewers really like the lens and design. The usability and portability also get good feedback, but there are some mixed views about the battery. There are some critical opinions about the flash and viewfinder.

We analyzed user and expert ratings, product age and more factors. Compared to other Digital Compact Cameras the Nikon Coolpix S600 is awarded an overall alaScore™ of 87/100 = Very good quality.

Below is a list of reviews for this or similar products. If you think this grouping is wrong please click here to flag.
Read more on our FAQ’s page.
Showing 1 - 17 of 48 Show Reviews: in English | in other languages (54)

alaTest has collected and analyzed 5 user reviews of Nikon Coolpix S600 from Amazon.co.uk. The average user rating for this product is 5.0/5, compared to an average user rating of 4.3/5 for other Digital Compact Cameras on Amazon.co.uk. Opinions about the lens and image quality are overall positive. The memory and portability also get good feedback. There are some critical reviews about the performance.

The Nikon Coolpix S600 is a capable and speedy basic point-and-shooter, but at $300, it should offer more than a bare-bones feature set and so-so performance.

I admit to having mixed feelings about the Nikon Coolpix S600. On one hand, it's a very attractive-looking ultracompact capable of producing pretty 10-megapixel photos. But on the other, it's a tad slow and underfeatured with an occasionally annoying...

A good, though not outstanding, compact camera, the Nikon Coolpix S600 is hindered by some shortcomings in its performance and operation.

I have to say that for the price, this camera is simply outclassed by the competition. This review would have been immensely different if it weren't for the price point. It's like trying to review a DVD at a Blue-Ray price, it could be a good review if...

too many steps for menu commands

The hip Nikon Coolpix S600 is great in style and might earn you some ‘oohs!

The Nikon Coolpix S-series are slim, stylish digicams that come complete with the latest Nikon technology such as Face-Priority AF, In-Camera Red-Eye Fix and D-Lighting.

The Nikon Coolpix S600 has a 10 megapixel imager, 4x optically stabilized, wide-angle zoom lens and a 2.7" LCD display. The S600 derives its power from a custom Li-ion battery, and images are stored on SD cards plus 45MB of built-in memory

Aimed at casual photographers and people who need a sturdy, lightweight, good looking compact camera for unexpected moments, and at enthusiasts who from time to time need a competent camera without the size and bulk of the much bigger prosumer and...

There's a lot to like about the S600, but it is not perfect. The small size is a big plus. You will get good color and out-of-the-box usability. You can take as much control as you like. Image quality is excellent and the camera also offers a large...

Review: Nikon Coolpix S600 — It's Not About The Megapixels

I think every family must have a hobby which all (or at least most) members of the family enjoy.  Such common interests are what tie them together (and gives you something to talk about at family picnics).  For my family, growing up, that common...

The COOLPIX S600's all-metal body will be available in ultra-cool Slate Black. For capturing action shots or fast moving kids, the COOLPIX S600 adds an Active Child Mode to the 14 existing scene modes that are standard in COOLPIX cameras.

Nikon COOLPIX B600 16MP 60x Opt. Zoom Wi-Fi Digital...
This Certified Refurbished product is refurbished to factory specifications, it shows limited or no wear $289.00 TO SHOP

Nikon 26528B COOLPIX B600 16MP 60x Optical Zoom...
This Certified Refurbished product is refurbished to factory specifications, it shows limited or no wear $249.00 TO SHOP