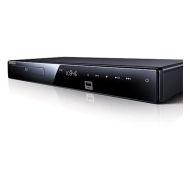 alaTest has collected and analyzed 147 reviews of Samsung BD-P1590. The average rating for this product is 2.8/5, compared to an average rating of 3.8/5 for other DVD Players for all reviews. Views about the design and usability are on the whole positive. Many are critical about the reliability.

We analyzed user and expert ratings, product age and more factors. Compared to other DVD Players the Samsung BD-P1590 is awarded an overall alaScore™ of 71/100 = Good quality.

Below is a list of reviews for this or similar products. If you think this grouping is wrong please click here to flag.
Read more on our FAQ’s page.
Showing 1 - 131 of 147 Show Reviews: in English

44% of the reviews on Amazon.com give this product a positive rating.

In conclusion, the Samsung BD-P1590 provides you with access to a variety of features not commonly found on Blu-ray players. While it does provide decent video quality, the BD-P1590 does suffer some problems when it come to firmware upgrades, or disk...

The BD-P1590 provides users with high definition video combined with a...

Bought cheap at Costco. Has worked okay, but successive firmware updates resulted in no DVD playing, and finally a bricked unit. I'm very unhappy with Samsung and won't buy their technology again.

Does what it's suppose to do(plays Blu-ray discs) how ever my Toshiba does a better job at upconverting my dvd's.nice remote, controls my Samsung 46" LCD. I've owned this since December 2009 got it at Walmart for $128.96

None really,needs higher volume setting than my LCD or Toshiba HD-DVD player

My son found this player at our local Sam's Club brand new for $150.00. I have enjoyed it on a daily basis. It especially makes my remastered gold plated CDs sound superior.

None that I can speak of in six months of ownership

Best thing about it is....everything! You've got Netflix, Pandora, and wireless connectivity! I took it right out of the box, set it up in less than ten minutes, and began watching my blue-ray movies. The picture quality was great; better than other...

I bought the Samsung BD1590 primarily to watch Netflix movies. I plugged in a (functioning) wireless adapter and couldn't get the player to recognize it. I contacted Samsung with the Live Chat. The Tech told me the only adapter that works is the...

The player works fine as stand-alone or on ethernet cable

After several generations of Blu-Ray players, this is an amazing unit for the price. Outside of the very first unit, I'd had every Samsung out there, and this would be the 6th generation of machines from the Korean company. While much smaller than ...

Many Entertainment Options. Ease of Use. Picture Quality and Remote. PRICE

After several generations of Blu-Ray players, this is an amazing unit for the price. Outside of the very first unit, I'd had every Samsung out there, and this would be the 6th generation of machines from the Korean company. While much smaller than...

Many Entertainment Options. Ease of Use. Picture Quality and Remote. PRICE

I purchased this product on January 12, 2009. I found it to be easy to set up and so far it works great. When you are using netflix you do need a ethernet cable to hook up to your internet and blu ray player, you do not need to purchase the one from...

Target personel are not familiar with this item. We had the same problem as the above reviews regarding the Wi-Fi LAN adapter. When my husband went into the store to buy this item the sales person repeatedly told him that he didn't need to buy anything...