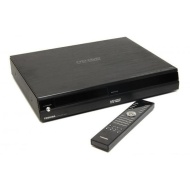 alaTest has collected and analyzed 244 reviews of Toshiba HD-A1. The average rating for this product is 4.2/5, compared to an average rating of 3.8/5 for other DVD Players for all reviews.

We analyzed user and expert ratings, product age and more factors. Compared to other DVD Players the Toshiba HD-A1 is awarded an overall alaScore™ of 85/100 = Very good quality.

Below is a list of reviews for this or similar products. If you think this grouping is wrong please click here to flag.
Read more on our FAQ’s page.
Showing 1 - 199 of 228 Show Reviews: in English | in other languages (11)

Toshiba throws down the gauntlet in the HD-DVD/Blu-ray war with its HD-A1 high-definition DVD player, but early adopters should beware of its quirks.

we wish the remote was as spiffy on the on-screen menu system. instead, the hd-a1 has one of the worst remote controls i've ever used. it took way too long to find the menu buttonswhich are little silver rectangles that offer few clues to what they...

The Toshiba HD-A1 bests the early Blu-ray competition in terms of picture quality and price--but only home-theater enthusiasts are likely to endure its long list of early-adopter caveats.

Introduction Cracking open the box of my first HD DVD player, I can't help but think back to the days of the VHS vs. Betamax and DVD-Audio vs. SACD format wars. With the pending release of Blu-ray, the competing high-definition disc format, many...

First-to-market player is a disgrace

Most of the reported 10,000-15,000 HD DVD players shipped to dealers apparently went to Best Buy, and if that retailer is representative, only 2-3 players were allotted to each store, along with a handful discs. The players were gone within a day—some...

Most of the reported 10,000-15,000 HD DVD players shipped to dealers apparently went to Best Buy, and if that retailer is representative, only 2-3 players were allotted to each store, along with a handful discs. The players were gone within a day--some...

While the HD-XE1 is without a doubt the best HD-DVD player on the Australian market, it's also the most expensive. Non-enthusiasts may find the HD-XE1's asking price a little high, and ultimately may be better served by a more affordable model.

OK, let's get the obvious bit out of the way first. Yes, there's a format war. Yes, this Toshiba deck ‘only' plays HD-DVD discs and most additional legacy discs, such as DVD and CD. And yes, that means if some movies only come out on Blu-ray, you are,...

The world might be slowly bowing towards Blu-ray, but that hasn't stopped Toshiba releasing its second HD DVD player in the UK. This time it's the company's flagship model, the HD-XE1. But is it any good? We take a closer look. The Toshiba HD-XE1 is a...

The Toshiba HD-XE1 is a very formidable player that offers plenty to the home cinema enthusiast looking for the top of the range performance.

For getting the very best out of HD-DVDs, you really can't go wrong with the Toshiba HD-XE1.