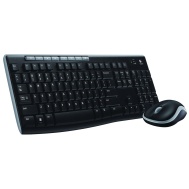 alaTest has collected and analyzed 5094 reviews of Logitech Wireless Combo MK270. The average rating for this product is 4.3/5, compared to an average rating of 4.1/5 for other products in the same category for all reviews. Reviews about the design and durability are overall positive. The price and usability are also appreciated, whereas comments about the reliability and size are mixed.

We analyzed user and expert ratings, product age and more factors. Compared to other products in the same category the Logitech Wireless Combo MK270 is awarded an overall alaScore™ of 90/100 = Excellent quality.

Below is a list of reviews for this or similar products. If you think this grouping is wrong please click here to flag.
Read more on our FAQ’s page.
Showing 1 - 1065 of 2722 Show Reviews: in English | in other languages (174)

alaTest has collected and analyzed 694 user reviews of Logitech Wireless Combo MK270 from Amazon.co.uk. The average user rating for this product is 4.3/5, compared to an average user rating of 4.1/5 for other products in the same category on Amazon.co.uk. Views about the design and durability are on the whole positive. The size and price also get good views. Reviews are divided on the reliability.

90% of the reviews on Amazon.co.uk give this product a positive rating.

alaTest has collected and analyzed 361 user reviews of Logitech Wireless Combo MK270 from Amazon.com. The average user rating for this product is 4.4/5, compared to an average user rating of 4.0/5 for other products in the same category on Amazon.com. People really like the design and size. The reliability and price also get good opinions, but comments are divided on the durability.

Available for as little as $20 online, the MK270 looks and feels a bit cheap, and it makes a fair amount of racket as you type. That said, the MK270's keys feel relatively springy and it's easy to set up.

You’ll never mistake the Logitech MK270’s typing feel for that of a pricier mechanical model. The keys on this wireless keyboard feel reasonably good considering its bargain price, however, and the included mouse goes above and beyond with its...

Does what it needs

- Not a gaming keyboard and mouse, not responsive enough

-works so good -7 months and about 150 intense gaming hours later. The included duracell replaceable batteries still work. Used my voltage reader they are at 1.51volts now. Brand new they are about 1.6volts, so not much change. I like this, bluetooth...

-absolutley none -wish it had LEDs for backlight

For the price it is worth it, holds up to minor gaming, have not tried it with more intensive games.

Cheap wireless combo for htpc. On/off switches are nice for the battery ocd in all of us.

I originally had it plugged into a usb 3.0 port and the keyboard was constantly dropping characters and the mouse was spotty on tracking. Once I plugged it into a usb 2.0 port it works perfectly. I only have one usb 2.0 port on the side of the case so...

I gave this product a low rating before because I started having issues with it lagging or not responding at all. I found out the problem was my GPU settings, believe it or not. I put in a better GPU and the mouse/keyboard works fine now.

If you have a problem with Logitech Wireless Combo MK27 where it starts lagging or not responding at all, either update your video drivers or back off your video settings when gaming.

All in all, i really love this product! I got it because im tired of the cables everywhere in front of me. This products works great for gaming as well.

- The fact that there is no Number lock light to indicate if my numlock is on.

Great Value and has good quality feel for price...no regrets.

Lucked out I guess with good responsiveness of this keyboard...not sure why some have connection issues. I'd say this IS a quality item, greeat price and more value than price. Buy it...you won;t regret it...

Does what it's supposed to do. Range is fine for me. I have 2: one on desk close to receiver and one in living room HTPC at a good distance and does not lose connection or such. It's lightweight, yet sturdy; like I said above, has a quality-feel to it...

Not really a con, but it feels slightly more compact than the keyboard (wired) I had before on desk (also a Logitech, with a few faded key letters) but that was a beefier keyboard that I had for years...

would recommend and purchase again

Tactile keyboard. I use this in a PC connected to TV environment for Battlefield at 60 inches, works fine for that, no lag or issues.

wish the mouse had a few more buttons.

A couple months ago I would have given this product 5 stars, five plus stars if possible! It really is a nice, tight, and well thought out design. I have been a huge fan of Logitech products for many years. This is the first Logitech product I have...

It worked great for nearly a full year. I really liked it.

After nearly one year the mouse and or keyboard will stop responding for a brief time. As you can well imagine that is a problem, especially when typing because every thing I type has to be proof read to find missing characters. Quite a pain! In this...

First thing to realize is that this was purchased for an HTPC. It is not marketed as a gaming combo, so anyone that complains about latency and issues with the system because they keep getting fragged in their favorite game, well you should have spent...