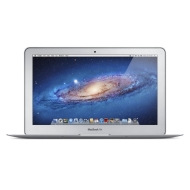 alaTest has collected and analyzed 651 reviews of Apple MacBook Air 11-inch (2011). The average rating for this product is 4.4/5, compared to an average rating of 4.0/5 for other products in the same category for all reviews. Reviewers really like the design and size. The portability and usability also get good feedback, but views are divided on the connectivity.

We analyzed user and expert ratings, product age and more factors. Compared to other products in the same category the Apple MacBook Air 11-inch (2011) is awarded an overall alaScore™ of 86/100 = Very good quality.

Below is a list of reviews for this or similar products. If you think this grouping is wrong please click here to flag.
Read more on our FAQ’s page.
Showing 1 - 343 of 411 Show Reviews: in English | in other languages (118)

90% of the reviews on Amazon.co.uk give this product a positive rating.

alaTest has collected and analyzed 283 user reviews of Apple MacBook Air 11-inch (2011) from Amazon.com. The average user rating for this product is 4.4/5, compared to an average user rating of 3.9/5 for other products in the same category on Amazon.com. Reviewers are impressed by the reliability and size. The performance and portability also get good comments. There are some negative comments about the screen. Reviews are divided on the battery.

There comes a time when that giant, corporate-issued laptop stops fitting into your lifestyle. When dragging around a Kensington roller case just won't

The latest MacBook Air 11-inch is Apple's smallest and least expensive laptop, with good performance and more than 11 hours of battery power.

Priced under $900. Elegant design. More than 11 hours of battery life in testing.

Conclusion The latest 11-inch Apple MacBook Air might be one of the smallest ultraportable laptops on the market, but its powerful Intel Core i5 processor and long-lasting battery life help it stay ahead of its Core-M-equipped rivals. It also offers...

(For a comparative look at the entire Apple MacBook line, read our 2012 MacBook Pro and MacBook Air roundup .)

The new 11-inch MacBook Air has third-gen Intel Core i5 and i7 processors, USB 3.0 ports, slightly improved battery life, and a lower price on the higher-end model.

The Air still has relatively few ports and an expensive starting $999 price for only a 64GB SSD -- and that 11-inch screen feels small for its size.

The new 11-inch MacBook Air is every bit as fast as the 13-inch Air, despite its smaller size, but you'll give up 2 hours of battery life in the bargain.

Unimpressive battery life. Other systems have more RAM. Lack of familiar amenities like Ethernet, an SD card reader, or a sizable hard drive may vex users.

Last October, Apple's 11-inch MacBook Air debuted. The tiny, slim ultraportable was the smallest laptop Apple had ever made. Its combination of size and power earned it a four-star review, with caveats: it had a last-generation Core 2 Duo processor,...

The new 11-inch Apple MacBook Air is dramatically faster than last year's version, has a backlit keyboard, and comes with a high-speed Thunderbolt I/O port.

This year's 11-inch MacBook Air improves on last year's model in several significant ways and is by far the fastest ultraportable you're likely to find, though some users will consider the limited flash storage space to be a hindrance.

Last week we published our review of the new 2011 MacBook Air. Both the 11 and 13-inch models ship with ultra low-voltage (ULV) dual-core Sandy Bridge CPUs, a first for the lineup. Also another first for the lineup is the fact that you can now get...

If you're buying the high-end ($1199) 11-inch MacBook Air and care about performance, the 1.8GHz CPU upgrade is worth it. You shouldn't expect any real impact on battery life in normal use but you'll see a noticeable gain in performance across the...

Netbook? No thanks. The smallest and cheapest notebook that Apple

Not so many ports; Reflective display; RAM is soldered down

Samsung’s 900X1B must prove itself first in the same sector.

Head over to http://www.gelaskins.com/ and grab a bunch!

Asus ZenBook UX11 and UX13 are up against Macbook Air

Apple's Macbook Air has missed some serious competition when it comes to the luxury, portable computer market. But that was until Acer and Asus entered the war zone with their powerful Intel Ultrabooks. Their latest addition is the brushed aluminum...

Blazing fast performance, same lightweight and chic design as with the previous Air model, excellent value, now with backlit-keyboard too, perfect for laptop serious travelers and those always on the go, super responsive – and did we mention how fast...

Base $999 configuration only comes with 2GB of ram, lacks SD card slot, we’re not sold on Thunderbolt yet

Apple MacBook Pro MD101LL/A 13.3-inch Laptop (2.5Ghz...
Renewed products look and work like new. These pre-owned products have been inspected and tested by Amazon... $455.00 TO SHOP

Apple MacBook Air 13.3in LED Laptop Intel i5-5250U...
Renewed products look and work like new. These pre-owned products have been inspected and tested by Amazon... $509.00 TO SHOP

Apple MacBook Air MJVM2LL/A 11.6-Inch laptop(1.6 GHz...
Renewed products look and work like new. These pre-owned products have been inspected and tested by Amazon... $449.00 TO SHOP