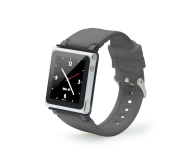 alaTest has collected and analyzed 7553 reviews of Apple iPod nano (6th Gen). The average rating for this product is 3.9/5, compared to an average rating of 3.9/5 for other products in the same category for all reviews. People really like the design and price. The portability and size are also appreciated. Many are negative about the reliability.

We analyzed user and expert ratings, product age and more factors. Compared to other products in the same category the Apple iPod nano (6th Gen) is awarded an overall alaScore™ of 95/100 = Excellent quality.

Below is a list of reviews for this or similar products. If you think this grouping is wrong please click here to flag.
Read more on our FAQ’s page.
Showing 1 - 5293 of 6250 Show Reviews: in English | in other languages (522)

alaTest has collected and analyzed 893 user reviews of Apple iPod nano (6th Gen) from Amazon.co.uk. The average user rating for this product is 4.0/5, compared to an average user rating of 4.0/5 for other products in the same category on Amazon.co.uk. Comments about the performance and portability are generally positive. The sound and size are also appreciated. There are some mixed comments about the price, and some have doubts about the reliability.

alaTest has collected and analyzed 4390 user reviews of Apple iPod nano (6th Gen) from Amazon.com. The average user rating for this product is 3.8/5, compared to an average user rating of 3.8/5 for other products in the same category on Amazon.com. Reviewers are impressed by the design and price. The portability and size also get good opinions, whereas there are some less positive reviews about the reliability.

75% of the reviews on Amazon.com give this product a positive rating.

iPod nano review -- as a watch

iPod nano watchbands -- they're everywhere! Seriously, ever since Steve Jobs said that an unnamed Apple board member jokingly planned to wear the new nano

Apple's sixth generation of the iPod nano is essentially the first complete rethinking the product has had since its debut in 2005. The previous form

New touchscreen UI is slick ; Smaller and lighter than ever before ; Sound quality was very good

Still a bit pricey ; Small size makes it easy to lose ; Lack of video playback could bother some

The current seventh-generation Nano was introduced way back in 2012, but still lists for $150 (£129, AU$219). Even with Apple's built-in pricing premium, it feels like it should cost about 40 percent less at this point.

With no Wi-Fi, you're stuck syncing music via USB from a PC or Mac running iTunes. It doesn't work with Apple Music subscriptions, and the low-res screen is tiny.

The iPod Nano is an aging music player that's hurt by its outdated reliance on iTunes and lack of subscription music compatibility.

The latest iteration of the Apple iPod nano does little to improve on the previous generation player, but a price drop makes it a better deal.

Lightweight, clip-on design. Larger icons make it easier to navigate menu. Simple, intuitive user interface. Screen can be adjusted to face in four directions. Several clock faces so you can wear the player as a watch. Strong battery life.

Apple's latest product: wristwatch or iPod? Discuss among yourselves.

Watchband not included. No wireless headphone support, so you’ll have to string yourself up with headphone wires. Checking the time can take a few steps. Battery life far shorter than most watches

No iPod model has received as many makeovers—both minor and dramatic—as the iPod nano. (Perhaps not coincidentally, no other iPod model has sold as well.) The originalnano was simply a scaled-down version of the standard iPod—tall and thin with a...

The ; costs less than before, is easier to navigate, and includes more Nike Plus fitness tracking capabilities. It's also still the best clip-on music player money can buy.

Many features have disappeared over the years, including video playback, camcorder, microphone, speaker, games, calendar, contacts, notes, and alarm clock. The touch-screen interface is overkill, requiring more attention than the time-tested click...

The sixth generation of the iPod Nano is the smallest yet, but it comes at the expense of valuable features and practical controls.

There is not much sense in looking anywhere else for a digital music player when price, features and design are taken care of by one particular company. There may come a time when other companies are able to eclipse the offerings that Apple gives, that...

There are no cons for this product

The New iPod nano is a Gem.  Really

Very small and easy to misplace.

It’s amazing how far we’ve come from the early, clunky iPods with a hard disk and manual controls. This iPad nano is not only a gem, but a full-fledged 21st century, wearable, technological accessory … and necessity.  The 5G nano just didn’t go there,...