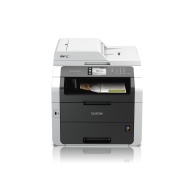 alaTest has collected and analyzed 2122 reviews of Brother MFC 9340 CDW. The average rating for this product is 4.1/5, compared to an average rating of 4.0/5 for other products in the same category for all reviews. Opinions about the performance and size are on the whole positive. The design and price also get good feedback, but opinions are divided on the print quality. Some have doubts about the paper handling and multifunction.

We analyzed user and expert ratings, product age and more factors. Compared to other products in the same category the Brother MFC 9340 CDW is awarded an overall alaScore™ of 85/100 = Very good quality.

Below is a list of reviews for this or similar products. If you think this grouping is wrong please click here to flag.
Read more on our FAQ’s page.
Showing 1 - 228 of 2038 Show Reviews: in English | in other languages (24)

alaTest has collected and analyzed 25 user reviews of Brother MFC 9340 CDW from Amazon.co.uk. The average user rating for this product is 4.5/5, compared to an average user rating of 3.9/5 for other products in the same category on Amazon.co.uk. Reviewers are impressed by the design. The usability is also mentioned favorably, whereas many are negative about the reliability and price.

alaTest has collected and analyzed 183 user reviews of Brother MFC 9340 CDW from Amazon.com. The average user rating for this product is 3.8/5, compared to an average user rating of 3.8/5 for other products in the same category on Amazon.com. Reviews about the design and size are generally positive. The price and usability are also appreciated, but some have doubts about the reliability.

78% of the reviews on Amazon.com give this product a positive rating.

alaTest has collected and analyzed 10 user reviews of Brother MFC 9340 CDW from Amazon.ca. The average user rating for this product is 4.4/5, compared to an average user rating of 4.2/5 for other products in the same category on Amazon.ca. Reviewers are impressed by the usability. The price also gets good reviews, whereas some have doubts about the reliability.

90% of the reviews on Amazon.ca give this product a positive rating.

The Brother MFC-9340CDW multifunction printer has some nice features, headlined by its duplexing ADF, though it has so-so speed and output quality.

The addition of a duplexing ADF makes the Brother MFC-9340CDW stand out among the three recently launched Brother MFPs. Its speed and output quality are solid if unspectacular, and it has a good feature set and range of connectivity choices. It's best...

A great printer for my small business. Been eyeballing this printer for about a year. I have enjoyed the HP Officejet Pro 8630 everyday since I brought it to my home office.

8600 Series Officejet printer are great except for

I really like the Officejet printer 8600 series except for the print head problem. I had a 8600 Officejet Pro for about 5 years, it was still working great until the print head went out. HP wanted $120 for a replacement head (that's all that was...

do a great job in all functions for home office, lots of interactive features, air print ready and does work, works great wireless

when print head goes out printer is worthless

Great printer-fax for the price

Got this for the office and we love the ease of printing from our iPhones. Great quality printing, even in color. Very happy with my purchase!

The quality of the product and the reduced price was a quick sale for me.

Good printer. Like the wireless features on it. Prints really good copies.

love love love it!!!! Can't say enough good things about it. It's a GREAT printer at a great BARGAIN. Works like a charm!!! its just perfect for our little families needs. Its a top of the line printer that does it all ie... copies, scans, fax and...

One month into our ownership we had a serious firmware failure that resulted in total replacement of this unit. The printer began printing an unsolicited job "receipt" on EVERYTHING we copied or printed. The scanner still worked but the printer is...

The set up of this all in one is really easy. If you can read then you can set it up easily. The prompts tell you exactly what to do. HOWEVER IF YOU DONT HAVE THE DISK THAT INSTALLS THE DRIVER FORGET IT. I couldn't find the installation disk when I...