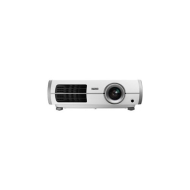 alaTest has collected and analyzed 131 reviews of Epson PowerLite Home Cinema 8100. The average rating for this product is 4.0/5, compared to an average rating of 4.2/5 for other products in the same category for all reviews. People are impressed by the noise and design. The usability and price are also appreciated, but views are divided on the reliability.

We analyzed user and expert ratings, product age and more factors. Compared to other products in the same category the Epson PowerLite Home Cinema 8100 is awarded an overall alaScore™ of 80/100 = Very good quality.

Below is a list of reviews for this or similar products. If you think this grouping is wrong please click here to flag.
Read more on our FAQ’s page.
Showing 1 - 129 of 131 Show Reviews: in English

alaTest has collected and analyzed 119 user reviews of Epson PowerLite Home Cinema 8100 from Amazon.com. The average user rating for this product is 3.9/5, compared to an average user rating of 4.2/5 for other products in the same category on Amazon.com. Reviewers are impressed by the noise and design. The usability and price also get good views, but opinions are divided on the reliability.

82% of the reviews on Amazon.com give this product a positive rating.

Inexpensive 1080p home theater projectors, aimed at people who want to watch full HD video on a large screen for a budget price, aren't news anymore. However, most of the truly inexpensive models ($1,000 to $1,500 in this context) are built around a...

Doesn't handle either standard-definition or 1080i input particularly well. Not 3D-capable

The Epson PowerLite Home Cinema 8100 isn't the least expensive budget-priced 1080p home theater projector, but it's easily worth the extra money you'll spend for it.

Simply, I’m thrilled with this projector as are all my family members, my friends and neighbors. I’m told we are now “that house” that people want to hang out for the theater alone. I believe the Epson highlighted a shortcoming in my room as it became...

I built my first projector from a lcd monitor and this although having a different throw is insanely adjustable its wonderful. I sold my 50 inch plasma and now use this all the time, works wonderfully.

Specs ; Quiet. I sit in front of it, if you had it ceiling mounted You probably would never notice it ; GUI and nice remote, Light indicators on top are nice ; Halo Reach, Netflix, Blue Ray all look great, you have to use blue rays on this thing...

Large projector, I was surprised and someone asked me if it was a really old one lol ; Wish it had a HDMI passthrough or a sound processor toslink out ; I had to get a HDMI to toslink/HDMI converter from another singe price site but it works great...

For the price...Actually, I don't even want to word it like so. Because this is a great projector regardless of price.. I'm just happy that it is on the affordable end at the price of an HDTV. On my 128inch screen the picture is amazing. The fan is not...

Cost effective as per bulb replacement / Operating hours ; Great Picture in all formats.. Spectacular in 1080p ; Amazing Black levels for the price ; Extremely Bright when you need it or all the time ; Great Adjustment options. Can mount at many...

Only 60hz Refresh Rate. Will not be able to utilize 3d television / games ; Color xy, AI not efficient and not worth even using ; As with many projectors you need to calibrate color settings for each input. Ex, Blue-ray, HD television, SD Television,...

Indoors or out it will more than meet you expectations!

The picture from this projector is better than my 1080i television! I project on to a 12 foot outdoor screen and it is simply breath taking! Full 1080p and more than enough lumens for an outdoor theater

Quite and gr8 color

Color is vivid and accurate out of the box. easy setup and ample lumens in the eco mode

Generates lot of heat. Not a on but wish i know it requires Metric screws

I've been using this projector for about 18 months now in my man-cave. It has performed flawlessly and has never let me down when watching a blu-ray. The price has dropped significantly since it was introduced (originally ~$2100.00). I considered it a...

Great blacks compared to any other projector in this price range ; vivid colors ; factory (out of the box) image calibration is spot-on ; great lamp life (and affordable replacements) ; More inputs than you'll ever need

Fan is a little loud, and it get noisier with age. Still, this one is much more quiet than most others in this price range

So many placement options. Sitting right next to it and I can not hear it. Looks amazing hard to believe it. I can not believe for the price of a 42" tv I have a 110" HD theater

Yeah right cons? Read the product reviews, this is the best for the money

my throw distance is just @ 12 ft.no need to purchase a screen if you have a clean wall.i went all out, replacing drywall and sanding and painting for 3-5 days.the work was well worth the time once i sat down and popped in some blu rays.you can find...

I love this projector!Crysis and other high resolution pc games looks amazing in 1080x1920 projected on a wall for a screen near 9 ft long across the top. blue ray movies 9ft long look great as well.very easy to set up and operate, youll be testing all...

not sure if its a con or not,fast action on screen can become blurry.my guess is that a dlp projector may not experience that issue, i am a projector newb,so i do not know for sure.to be honest i think the blur may be a selling point to some,with it...

I did tons of research prior to purchasing my Epson 8100. It took me many long nights and questions to folks in the community before I came to buy this unit.