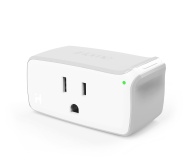 alaTest has collected and analyzed 5 reviews of iHome iSP5 SmartPlug. The average rating for this product is 4.2/5, compared to an average rating of 3.6/5 for other products in the same category for all reviews.

We analyzed user and expert ratings, product age and more factors. Compared to other products in the same category the iHome iSP5 SmartPlug is awarded an overall alaScore™ of 65/100 = Good quality.

Below is a list of reviews for this or similar products. If you think this grouping is wrong please click here to flag.
Read more on our FAQ’s page.
Showing 1 - 5 of 5 Show Reviews: in English

Once you get it set up, using your iHome iSP5 SmartPlug with your iOS device is easy and even fun. iHome's app allows you to organize your home into rooms and zones, and I got a kick out of controlling the plug with Siri.

Setting the plug up proved problematic on both iOS and Android, and the bare-bones Android app isn't worth the effort. Even on iOS, iHome's plug really only does one thing, whereas similar devices can also monitor energy use or talk to other peripherals.

Avoid the iSP5 SmartPlug if you're an Android user. For iOS, it's worth considering given the HomeKit compatibility and relatively low cost, but if you want to start building a larger smart home, I'd wait for a more robust HomeKit option as at least...

I'm a Mac user from the beginning with a background in graphic design, product design, photography. I'm a graduate of the Rhode Island School of Design with a degree in Illustration. I spent much of my professional career designing consumer products in...

Longtime "Made for iPhone" accessory maker iHome is diverting course from its bread-and-butter bedside alarm clock/radios toward the burgeoning connected home sector. Its first product, an app-connected, HomeKit-compatible smart plug...

No geofencing rules ; HomeKit is still unstable ; The iHome iSP5 SmartPlug sells for $39.99 and can be purchased through ; , as well as internet retailers like ; .

The SmartPlug is a solid first foray into the connected home sector for iHome. It marries reliable operation with an inconspicuous design and a level of fit and finish to be expected from a well-established accessories company. iHome's Control app is...

Power your connected home with the iHome Smart Plug

Smart plugs are becoming a dime a dozen. iHome hopes to separate its Smart Plug from the crowd with HomeKit compatibility. The New Jersey-based speaker maker will be a launch partner when Apple gets its smart-home platform rolling. The Smart Plug is...

iHome's only advantage, then, will be the cost. If you're just looking to try out Siri's smart home chops when HomeKit launches, the iHome Smart Plug will be worth a look. My recommendation would be to spend a little more for a more capable model if...

Among all the other options out there, this one has the coolest & slimmest design which doesn't block the outlet & several ones can be connected next to each other.