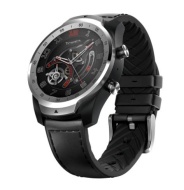 alaTest has collected and analyzed 36 reviews of Mobvoi Ticwatch Pro. The average rating for this product is 3.8/5, compared to an average rating of 4.1/5 for other products in the same category for all reviews. Reviews about the reliability and usability are on the whole positive. The design and price also get good feedback, whereas many are less positive about the comfort and size. Opinions are divided on the software.

We analyzed user and expert ratings, product age and more factors. Compared to other products in the same category the Mobvoi Ticwatch Pro is awarded an overall alaScore™ of 89/100 = Very good quality.

Below is a list of reviews for this or similar products. If you think this grouping is wrong please click here to flag.
Read more on our FAQ’s page.
Showing 1 - 10 of 18 Show Reviews: in English | in other languages (17)

The TicWatch Pro's best feature is its long-lasting battery, but you have to sacrifice most of the watch's smarts to use it.

Design is too big and too aggressive. ; Wear OS is in need of a facelift. ; Rubberized band gets uncomfortable after a while.

Mobvoi might not be as common of a brand as LG or Fossil, but its backed by two big-name companies: Google and Volkswagen. In just about a year, Mobvoi has released three Wear OS watches, and while the TicWatch Pro is the most expensive of the lot, at...

We may still argue about the usefulness of smartwatches, but few would disagree that a wearable with a flat battery is no use at all. The TicWatch Pro running Wear OS by Google wants to make sure that's not an accusation you can level at it, using a...

Bulky and uninspiring design ; Takes a while to boot back into full Smart Mode ; Snapdragon 2100 is feeling tired

Mobvoi is innovating on a smartwatch platform that's standing still.

The TicWatch Pro 4G/LTE is an iterative upgrade that sticks tightly to the blueprint established by the original TicWatch Pro. It's the best Wear OS smartwatch with LTE support out there, but it's still lagging well behind non-Wear OS rivals.

Mobvoi TicWatch Pro review (update: now you can get it 20% off)

The Mobvoi TicWatch Pro solves a lot of problems that have plagued Wear OS watches since their inception. This is our full TicWatch Pro review.

I have not worn a watch for many years — more than a decade. After wearing the Mobvoi TikWatch Pro 4G/LTE for one month I think I will be wearing it for the foreseeable future. I like the way it looks on my wrist and some of the features are really...

We've tested Mobvoi TicWatch Pro 4G review over the past few weeks, the LTE-enabled WearOS watch. Read on to find out what we made of it.

As far as Wear OS smartwatches go, the TicWatch Pro is one of the best options out there. Now with cellular connectivity and some other bells and whistles, it’s even better.

Mobvoi Ticwatch Pro 4G/LTE Review: One of the Best Available

Mobvoi made their new TicWatch Pro 4G/LTE official this morning and since I've spent several days with one on the wrist, figured I'd share some additional thoughts on whether or not this could be your next Wear OS watch. While not a full review,...

Display ; The transparent second display is a surprisingly good idea. ; Battery Life ; It's the key marketing message for the watch, and it doesn't disappoint. ; Features ; With NFC for Google Pay and improved GPS, it rights the wrongs of previous...

Processor ; The SoC is more than 2 years old, and performance certainly suffers at times. ; Size ; It's pretty chunky. If you wanted something inconspicuous, this is not the one. ; Price ; Not extortionate, but there are cheaper options out there with...