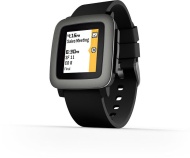 alaTest has collected and analyzed 211 reviews of Pebble Time. The average rating for this product is 4.1/5, compared to an average rating of 4.1/5 for other products in the same category for all reviews. Reviewers really like the size and price. The software and usability are also mentioned favorably, whereas many are negative about the touch screen and image quality.

We analyzed user and expert ratings, product age and more factors. Compared to other products in the same category the Pebble Time is awarded an overall alaScore™ of 88/100 = Very good quality.

Below is a list of reviews for this or similar products. If you think this grouping is wrong please click here to flag.
Read more on our FAQ’s page.
Showing 1 - 14 of 122 Show Reviews: in English | in other languages (89)

alaTest has collected and analyzed 4 user reviews of Pebble Time from Amazon.co.uk. The average user rating for this product is 4.0/5, compared to an average user rating of 4.0/5 for other products in the same category on Amazon.co.uk. Reviewers really like the battery and usability. The price and software are also appreciated, but there are some mixed views about the performance. Many are negative about the portability.

The Pebble Time is waterproof, has a sun-friendly screen, and sports 4-day battery life, but it cannot compete with Android Wear and Apple Watch.

Pebble is the grandfather of the modern smartwatch, and it’s starting to spout gray hairs. Long battery life, water resistance, and a display that you can read in the sunlight may be have been great selling points years ago, but Android Wear and the...

Pebble needs to distinguish itself from its Android Wear and Apple rivals in order to stand out, and it does so with the Time. Its color e-paper technology results in an always-on display that looks great under bright sunlight, plus battery life that...

iOS functionality is limited ; Voice function doesn't extend to Google Now or Siri ; Can only choose one app for activity tracking ; Pricey for what it offers

No, the Pebble Time won't win any fashion contests with its toy-like design and cutesy animations. And no, it won't win over those who yearn for tons of high-end features in their wearables. But if your idea of a smartwatch is that it should be more of...

The Pebble Time brings a color display and a microphone to the company's winning formula, making it a solid choice for first-time smartwatch buyers.

Conclusions The Pebble Time is the Game Boy Color to the Pebble's original Game Boy, and that's great. It displays charming visuals in color, adds voice-to-text communication, and has all the things you expect a Pebble watch to have: instantaneous...

Scott Stein wore the Pebble Time for a week: here's his full review.

Display sometimes hard to read in dim light; fitness apps aren't as polished as on other premium smartwatches; apps and watch faces are plentiful but very mixed in quality; lack of touchscreen limits interactivity with some apps.

I've been wearing Pebble's latest, the Pebble Time, for a week. It lands in a world of Apple Watches and Google watches , and is finally being shipped to those who supported it on Kickstarter. For those who didn't, it'll cost $199 (UK and AU prices not...

Display sometimes hard to read in dim light; fitness apps aren't as polished as on other premium smartwatches; apps and watch faces are plentiful but very mixed in quality; lack of touchscreen limits interactivity with some apps.

It's 7:30PM on Thursday evening, and I'm more than half way through my train ride home from work. I glance at the Pebble Time on my wrist and hit a button to take a look at the battery meter....

Can the Pebble Time compete with the Apple Watch? The better question is, should it even have to?

Really great battery life. When it comes to smartwatches, less is definitely more. The timeline metaphor is simple and understandable. Smart straps are a smart idea

Turns out design does matter, Pebble. The Time's screen and hardware both leave a lot to be desired. The interface is cutesy at the expense of being useful. If you're an iPhone user, forget about it

Both Amazon and the official Pebble site are now selling the Time for $50 off, making the final price a very convenient $149.99.

We are not sure when a similar deal will show up, so if you have been looking for a smartwatch with formidable battery life, you best take advantage of this offer. We also don’t know if this price cut is temporal or not, but I would assume it is. Who’s...

Pebble Time review: Can the Time withstand competition from Apple and Google?

When smartwatches were only a dream, Pebble came out of nowhere to introduce a watch that actually had a brain. And for the past few years, Pebble has quietly been the most well-rounded wearable company out there, offering a strong lineup of devices...

There are a lot of alternatives on the market, which means the $199 Pebble Time has more competition than ever before. But longtime Pebble fans will find that the Time is a great tool to get notifications, and that market-leading week-long battery...

The last year or so has seen an unprecedented amount of interest in wearables, and smartwatches in particular.