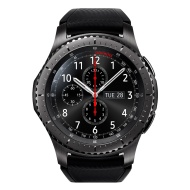 alaTest has collected and analyzed 215 reviews of Samsung Gear S3 (2016). The average rating for this product is 4.2/5, compared to an average rating of 4.1/5 for other products in the same category for all reviews. Views about the reliability and performance are overall positive. The battery and design also get good feedback. Many are critical about the portability and software, and the price and size get mixed views.

We analyzed user and expert ratings, product age and more factors. Compared to other products in the same category the Samsung Gear S3 (2016) is awarded an overall alaScore™ of 88/100 = Very good quality.

Below is a list of reviews for this or similar products. If you think this grouping is wrong please click here to flag.
Read more on our FAQ’s page.
Showing 1 - 10 of 178 Show Reviews: in English | in other languages (35)

Samsung’s Gear S3 (Frontier) isn’t revolutionary and if you think smartwatches are useless and unnecessary, this one won’t change your mind. You’ll get access to notifications and you can act on some of them, but the device is more a limited extension...

With Gear S3, Samsung tries to throw it all on a watch, but it doesn't all stick

The Gear S3 has tons of features, and it's even a phone. But it isn't the best.

Samsung's watch survives, for now, as one of the better options for Android phone users.

Though it sounds impressive on paper, the Samsung Gear S3 is more smartwatch than almost anyone needs.

Bulky. Expensive. Samsung Pay requires you to lock the watch with a PIN. Doesn't sync with popular fitness apps.

If we were just tallying features, the Samsung Gear S3 would get a higher rating than you see at the top of the page. But our view on smartwatches is that smaller, simpler, and clearer is better. Pebble's watches fit that bill, but Pebble is now gone....

The Samsung Gear S3 smartwatch puts convenience at your wrist, with Samsung Pay providing the ability to make mobile payments virtually anywhere you can tap or swipe a credit or debit card. With Magnetic Secure Transmission (MST) and Near Field...

In a quest to uncover what truly defines a watch, Samsung drew inspiration from manufacturers around the globe, paying particular attention to the skills and craft of assembling a delicate, yet highly complex timepiece. Influenced by the craftsmanship...

Using a Gear S3 with an iPhone: Too many concessions

Last week, Samsung released the iOS version of its Gear S app . With the app, users can use the Gear S2 or Gear S3 smartwatch with an iPhone for the first time.

Samsung Gear S3 first impressions: Much improved over the S2, but with potential to be the best smartwatch

Samsung continues to push the limits of technology, with the best LTE smartwatch available today. The Gear S3 can be even better once the advertised capability is released to the public.

Samsung Gear S3 review: A good smartwatch, but probably not enough to win over smartwatch skeptics

Let's get this out of the way first: smartwatches have not been the big sellers that many technology firms were hoping they would be. Android Wear is

Design ; It looks classy and like a real watch. ; Display ; Completely round AMOLED with great colors and brightness. ; Samsung Pay ; Contactless payments with the Gear S3 are super easy and work almost everywhere. ; Battery life ; About two days with...

Design again ; It's a little on the large side, and is pretty explicitly a men's watch. ; Setup ; Getting all the Samsung stuff installed on a non-Samsung phone is a bit of a pain. ; S Voice ; It's no match for OK Google or Assistant. ; Notifications ;...

I'm still not convinced that a smartwatch is something most people need. It's still a novelty for people who are very into technology and gadgetry. Even among smartwatch fans, the $350 Gear S3 will be a tough sell. However, you do get a very nice...

Samsung's never shied away from going big. Big phones, big TVs, big watches. In fact, that was one of the defining characteristics for the first few generations of the Gear line, the first few of which were really more wrist-worn tablet than smartwatch

Samsung’s had a few generations more than much of its competition to refine its smartwatch experience. Last year the company finally hit upon a winning formula with the S2, a great combination of design, functionality and software refinement.