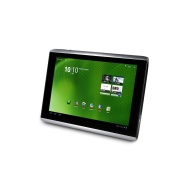 alaTest has collected and analyzed 2155 reviews of Acer Iconia Tab A500 / A501. The average rating for this product is 4.1/5, compared to an average rating of 4.2/5 for other products in the same category for all reviews. Reviews about the price and size are on the whole positive. The screen and performance are also mentioned favorably. There are some less positive reviews about the GPS navigation and portability.

We analyzed user and expert ratings, product age and more factors. Compared to other products in the same category the Acer Iconia Tab A500 / A501 is awarded an overall alaScore™ of 88/100 = Very good quality.

Below is a list of reviews for this or similar products. If you think this grouping is wrong please click here to flag.
Read more on our FAQ’s page.
Showing 1 - 950 of 1457 Show Reviews: in English | in other languages (129)

alaTest has collected and analyzed 92 user reviews of Acer Iconia Tab A500 / A501 from Amazon.co.uk. The average user rating for this product is 4.0/5, compared to an average user rating of 4.3/5 for other products in the same category on Amazon.co.uk. Opinions about the screen and price are generally positive. The battery and performance also get good feedback, but some have doubts about the design and portability. There are some mixed views about the reliability.

79% of the reviews on Amazon.co.uk give this product a positive rating.

Amazon.com review summary for Acer Iconia Tab A500 / A501

alaTest has collected and analyzed 848 user reviews of Acer Iconia Tab A500 / A501 from Amazon.com. The average user rating for this product is 4.0/5, compared to an average user rating of 4.1/5 for other products in the same category on Amazon.com. People really like the screen and design. The price and performance are also mentioned favorably. There are some mixed comments about the portability, while some have doubts about the GPS navigation and connectivity.

84% of the reviews on Amazon.com give this product a positive rating.

We waited nearly the entire summer for the Acer Iconia Tab A501 to break daylight. Now that it's finally shone its uber-glossy face, we were anxious to

All the things we liked about the A500 still keep our attention with the A501. However, signing a contract for a data plan you can only use on one device doesn't get us too excited.

Last month, the Motorola Xoom was the only officially sanctioned Android 3.0 tablet available in the United States. Now there are four -- the

Editors' note: You may experience a feeling of déjà vu reading the following review of the Acer Iconia Tab A501 4G. The basic design is virtually identical to the A500 released earlier this year, so we've taken much of the text of that review and...

The Acer Iconia Tab A501 4G (AT&T) is the cheapest 4G Honeycomb tablet currently on the market. Also, it includes a full USB port and Micro-HDMI.

The tablet ships with Android 3.0.1, limiting its video compatibility, features, and performance. The A501's screen has a narrow viewing angle, and it fails to earn its hefty weight.

The Acer Iconia Tab A501 4G (AT&T) is the A500 with HSPA+ connectivity at a very competitive price compared with other 4G tablets; however, its adherence to Android 3.0 limits its appeal.

Acer's Honeycomb tablet, the Iconia Tab A500, has similar strengths and weaknesses to its direct competitors, but its $450 price is easier to swallow than some others.

Acer doesn't change much about Honeycomb, except for a few icons on the home screen and the default background. When you turn on the A500 for the first time, you're greeted by four folders instead of app icons. You'll find eReading, Games, Multimedia,...

Motorola made a splash in early 2011 when it released the first tablet to run Google's tablet-optimized Android 3.0 operating system (aka Honeycomb). But enthusiasm for Google's tablet OS didn't translate into Apple iPad -level success for Motorola's...

The Iconia Tab is thick, and one of the heaviest consumer tablets we've seen. Some locally stored HD video files wouldn't play properly.

Acer's Iconia Tab offers the features of the Motorola Xoom at iPad-beating prices but weighs in as the heftiest Android tablet yet.

Honeycomb Alternative! Acer's tablet presence has so far been fai

Can be found in masses in our TOP 10 tablets. Those that prefer smaller, should also take a closer look at the Samsungs Galaxy Tab, with which it is also possible to make phone calls.

While taking these sample photos and videos, I can give some feedback on using the screens under direct sunlight. With both tablets set to maximum brightness and auto-dimming disabled, the iPad 2 was much easier to view under these conditions. At times...

Acer ICONIA TAB A501 is a version of ICONIA TAB A500 Android tablet made for GSM-based network such as those operated by AT&T. Features include a 10.1-inch touchscreen, dual-core NVIDIA Tegra 2 processor, 5-megapixel rear camera, 2-megapixel front...

In a straight comparison to the Motorola Xoom, the Iconia A501 has the advantage of feeling lighter and bearing a much better display. However, we fail to understand why the A501 comes with Android 3.0.1 while the rest of the rivals are either on...

All of the buttons and ports are placed in comfortable locations, perhaps with the exception of the front-facing webcam. I found its placement to be a little odd, seeing as it was not centered on either the long or short side of the tablet. Instead,...

There may be a couple of minor issues with the A501, including the an outdated OS version and mounds of bloatware that plagued its predecessor, but otherwise it's a modestly priced (subsidized, that is) Android tablet that performs quite well. Just be...