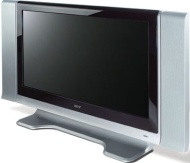 alaTest has collected and analyzed 45 reviews of Acer AT3705-MGW. The average rating for this product is 3.6/5, compared to an average rating of 4.3/5 for other products in the same category for all reviews. Some have doubts about the usability and image quality.

We analyzed user and expert ratings, product age and more factors. Compared to other products in the same category the Acer AT3705-MGW is awarded an overall alaScore™ of 86/100 = Very good quality.

Below is a list of reviews for this or similar products. If you think this grouping is wrong please click here to flag.
Read more on our FAQ’s page.
Showing 1 - 9 of 9 Show Reviews: in English | in other languages (36)

A 37in LCD HDTV for £800? Is this a serious bargain, or has Acer cut one too many corners?

If you are thinking about integrating a media server into your home theatre, this is the LCD for you.

Connection ports may be difficult to reach if wall-mounted. Some ghosting effects on action-intensive analogue TV.

If you are thinking about integrating a media server into your home theatre, this is the LCD for you. With a host of top-end features, multiple inputs and stand-out performance, the AT3705-MGW is the perfect compliment to your home media network.

It's usually the case that where a traditionally PC brand decides to make a TV, it tries to make it as cheap as possible. And that's exactly the case with Acer's AT3720: it's a snip at £800. It certainly looks cheap, thanks to its plasticky build

It's certainly cheap, but it would have to be a fair bit cheaper to justify its many disappointments

If you are just after a TV then this one is fantastic! If you are after a media centre then it is alright, if the software/support improves then it will be a great combo. If you run a HTPC through the DVI it is really good!

The image is great. The sound is impressive as well which was a nice surprise. 1080i/1080p are achievable running through the DVI.

The media gateway still has some bugs, pausing for no reason, no connecting etc. It would be nice to be able to upgrade the software in the media gateway and not just rely on Acer's firmware updates. The software is hard to locate and there is not much...

Good value for money, I can't tell the difference in picture from a sony or other high price brand. Would highly reccomend.

Only has SD Digital Tuner

the acer server software you need to install on your pc to host the media files is no good. Used to get skipping/file stop playing from time to time. Then I switched to fuppes and it's all good.viewing angle not that great - whiteer/grayer when viewed...

Not bad performance...for an LCD.

1) Poor performance with dark scenes in movies. 2) Inflexibility of display formats for Mecdia Centre playback3) Connectors not ideally placed for wall-mount3) Very chunky unit - not all that attractive

Would never buy another Acer nor would I purchase a set from the Source.

Nine months after purchasing the tv, the screen divided into a quadrant. The left side could be watched for about a half hour and then the entire screen was snowy and unable to be watched. This is my 2nd set. They replaced the first one and now the...