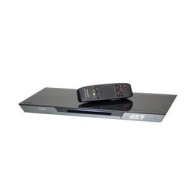 alaTest has collected and analyzed 542 reviews of Panasonic DMP-BDT320. The average rating for this product is 3.8/5, compared to an average rating of 4.0/5 for other products in the same category for all reviews.

We analyzed user and expert ratings, product age and more factors. Compared to other products in the same category the Panasonic DMP-BDT320 is awarded an overall alaScore™ of 88/100 = Very good quality.

Below is a list of reviews for this or similar products. If you think this grouping is wrong please click here to flag.
Read more on our FAQ’s page.
Showing 1 - 351 of 384 Show Reviews: in English | in other languages (47)

80% of the reviews on Amazon.co.uk give this product a positive rating.

If you have an older TV model, getting a new Blu-ray player might be a great option to renew its capabilities. The Panasonic DMP-BDT320 features a good range of Viera Connect Smart TV functions, along with the ability to handle 3D content.

For those who appreciate using video calls and conferencing with Skype on a big screen, this player has the capability to do so, provided that you have webcam to go along with it. Perhaps Panasonic should bundle in a webcam to sweeten the deal as easy...

Home cinema experiences have reached new heights when HDTV displays and Blu-ray players were introduced. When people thought that things couldn't get any better, 3D technologies were thrown in both of these devices. Many people saw this as a pricey...

Smart TVs aren’t selling all that much because people are contented with their displays. Those Internet-connected displays look appealing but a lot of people are not willing to spend so much on a TV that has to replace an older model. With Panasonic’s...

If you want the best picture quality from your Blu-ray and DVD movies, the Panasonic DMP-BDT320 is an easy choice - it's one of the best players we've tested for both 2D and 3D Blu-rays, as well as DVDs. Over and above this it's got Panasonic's...

Panasonic's first Blu-ray player of 2012 is a belter, with improved smart features and gobsmacking pictures

The Panasonic DMP-BDT320 3D Blu-ray player dares to be different but does it pay off?

Expert review by : Steve May (homecinemachoice.com)

With its angled edges and slot-loading disc mechanism, the Panasonic DMP-BDT320 at first glance looks like a jazzed up version of the brand's cheaper DMP-BDT220, but the two players are chalk and cheese. This home theatre lightweight puts in a...

Over £200 is an awful lot to pay for a simple Blu-ray player, but Panasonic has loaded the DMP-BDT320 disc spinner with a host of extras and made it something of a streamer.

If you want the best picture quality from your Blu-ray and DVD movies, the Panasonic DMP-BDT320 is an easy choice - it's one of the best players we've tested for both 2D and 3D Blu-rays, as well as DVDs. Over and above this it's got Panasonic's...

Standard touch-pad remote is difficult and slow to use ; No reverse frame stepping ; Smart function interface is a little behind the times

If you value picture quality on tricky discs higher than smart functions, then this is the Blu-ray player to buy. Those smart functions, though, while plentiful and fairly powerful, are presented in a way that doesn't really invite the user to delve...