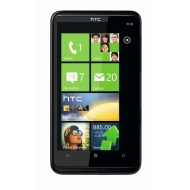 alaTest has collected and analyzed 726 reviews of HTC HD7 / HTC HD3 / HTC Gold / HTC Diamond3 / HTC Mondrian. The average rating for this product is 3.7/5, compared to an average rating of 4.1/5 for other Cell phones for all reviews. Reviewers are impressed by the portability and size. The performance and screen are also appreciated. Some have doubts about the reception and connectivity. There are some mixed comments about the apps and reliability.

Below is a list of reviews for this or similar products. If you think this grouping is wrong please click here to flag.
Read more on our FAQ’s page.
Showing 1 - 137 of 322 Show Reviews: in English | in other languages (377)

alaTest has collected and analyzed 35 user reviews of HTC HD7 / HTC HD3 / HTC Gold / HTC Diamond3 / HTC Mondrian from Amazon.co.uk. The average user rating for this product is 4.2/5, compared to an average user rating of 4.1/5 for other Cell phones on Amazon.co.uk. Reviewers really like the performance and battery. The usability and portability also get good feedback, but opinions are divided on the reception.

alaTest has collected and analyzed 92 user reviews of HTC HD7 / HTC HD3 / HTC Gold / HTC Diamond3 / HTC Mondrian from Amazon.com. The average user rating for this product is 3.5/5, compared to an average user rating of 3.8/5 for other Cell phones on Amazon.com. People are impressed by the performance and durability. The usability and price also get good views, but many are less positive about the size. Reviews are divided on the reliability.

70% of the reviews on Amazon.com give this product a positive rating.

There's no such thing as a small WP 7 phone. However, 4.3 inches of screen estate are really something else. The best case scenario: the HTC HD7 is the phone you've been waiting for. The worst case scenario: it's too big to fail.

The screen that just keeps on going meets the OS that refuses to fit on a single display. Yes, Microsoft's Windows Phone 7, like Windows Mobile 6.5 and

The HTC HD7 is T-Mobile's first Windows Phone 7 device and makes its debut on November 8, along with the Samsung Focus and HTC Surround for AT&T. The HD7, however, holds the distinction of having the largest display of any Windows Phone 7 handset in...

The HD7 is on the bigger side and lacks expandable memory. Speaker is weak. Touch screen isn't quite as sharp or vibrant as the latest devices.

The hardware could use a bit of updating, but the HTC HD7 for T-Mobile combines the power of Windows Phone 7 with a large touch screen and delivers satisfying performance.

T-Mobile's first Windows Phone 7, the HTC HD7 is a big canvas for video and games.

Conclusions The HTC HD7 is a big, good-looking phone, and Windows Phone 7 is a great-looking OS. But the HD7 falls behind our Editor's Choice, the T-Mobile myTouch 4G ($199, 4.5 stars), on a range of measures. The myTouch 4G has faster Internet speeds,...

HTC HD7 Review - This in-depth HTC HD7 review goes over the HTC HD7 design, user interface and compares this handset with others in the same price range.

The HTC HD7 is currently the Windows Phone 7's flagship device and it delivers a great performance with its large display; whether it is emailing, browsing the web, getting directions on Bing maps, reading and editing a document or watching videos,...

The HTC HD7 wears its potential on its sleeve. The biggest of the first batch of Windows Phone 7 devices, at 4.3-inches it's also one of the largest smartphones of any OS on the market. We've already given our approval to Windows Phone 7 in our...

It’s hard to shake a sense of familiarity with the HTC HD7 – that feeling that, despite the new OS, we’ve seen this device before. We’re of course referring to the HTC HD2 , the de facto Windows Mobile 6.5 flagship, which shares not only the same...

The HTC HD7 has a lot to offer PC users looking for a multimedia-centric workhorse cell phone. We appreciated many of the features included to make this Windows Phone 7 fun to use including streaming Netflix movies, playing XBOX Live games, and even...

Another year, another new iPhone, and also another new gargantuan HTC phone sporting a Microsoft mobile platform. With that in mind, it's only natural to pit latest the iterations of each smartphone against one another – but unlike last year, the...

Microsoft and HTC have reunited to give you the HTC HD7. A fine piece of hardware cut from the same cloth as the EVO 4G and the HTC Desire HD. The HTC HD7 sports a 4.3 inch screen, a host of connectivity options, a 5MP camera with autofocus and dual...

I've been an Android user since the G1 . Picked one up on launch day, in fact. I was working in an environment that was heavily embedded in open source, so the greater concepts that surrounded Android appealed to me. It was my first real smartphone,...

HTC SteamVR Base Station 2.0
Includes One base station and one power adapter per order $199.00 TO SHOP

HTC Vive Deluxe Audio Strap
Designed with adjustable earphones, allowing you to enjoy the 360-degree realistic sound in even more... $99.00 TO SHOP