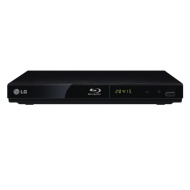 alaTest has collected and analyzed 17 reviews of LG 1080p Blu-ray Player with Built-In Wi-Fi- DVD Player. The average rating for this product is 3.9/5, compared to an average rating of 4.0/5 for other products in the same category for all reviews.

We analyzed user and expert ratings, product age and more factors. Compared to other products in the same category the LG 1080p Blu-ray Player with Built-In Wi-Fi- DVD Player is awarded an overall alaScore™ of 75/100 = Good quality.

Below is a list of reviews for this or similar products. If you think this grouping is wrong please click here to flag.
Read more on our FAQ’s page.
Showing 1 - 10 of 17 Show Reviews: in English

It loads fast and has yet to cause me a problem. I'd say if you can find it relatively cheap it's well worth it!

I bought this for $49 before Black Friday - it sold out in a half a day **twice** at that price. I had been considering the $38 Black Friday deals at other stores but this had built-in wi-fi and the extra features were well worth the extra

I have the included apps on my TV already so I haven't had much use for them at this point. But I was still willing to pay the extra just to have them and the wi-fi built in and to make sure that I got a quality player

Does the job with WIFI built in for $, if you need more apps buy a $$$ blu ray player or a PS3. No problems here with remote, as expected response time. Faster than loading with PS3. WIFI is easy to setup. Purchased for $50 on Black Friday! At $60...

Can't comment- Why would anyone buy a product with no warranty? Am I missing something

I found this Blu-Ray player easy to set up- just about 3-4 steps and it was done!

Powerfull little player with a lot of great features.

the wireless works very well if you have a good modem, but the real value is its ability to play dvd's made off the internet. there seems to be no blocks and any concert or movie that I down load plays.....wow !

Very pleased with the LG Blu--ray Disc Player with wi-fi. Easy to use. Great price. Very happy with my purchase.

I've had no problems using it as a DVD player or for watching Netflix. Does what it's supposed to, was relatively easy to hook up to my WiFi, and it's working well. Two thumbs up.

I purchased this device as a boxing day special. Now it works great playing DVD's however I bought this so I could access netflix and youtube. Now it worked great for the first 2 weeks and then all of a sudden it just didn't want to work or connect. I...

I have given upKeep having wi-fi issues , keeps asking for wi-fi details over and over again. And if you back out and go to the check status it says its fine.Then Netflix stop working and updated software it helped but now remote is very slow. And my...