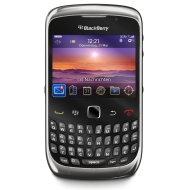 alaTest has collected and analyzed 3372 reviews of BlackBerry Curve 9300. The average rating for this product is 3.8/5, compared to an average rating of 4.1/5 for other Cell phones for all reviews. Reviewers are impressed by the design and price. The portability and performance are also appreciated. The screen and size get mixed opinions, and many are less positive about the apps and reliability.

We analyzed user and expert ratings, product age and more factors. Compared to other Cell phones the BlackBerry Curve 9300 is awarded an overall alaScore™ of 86/100 = Very good quality.

Below is a list of reviews for this or similar products. If you think this grouping is wrong please click here to flag.
Read more on our FAQ’s page.
Showing 1 - 1099 of 2816 Show Reviews: in English | in other languages (353)

78% of the reviews on Amazon.co.uk give this product a positive rating.

alaTest has collected and analyzed 859 user reviews of BlackBerry Curve 9300 from Amazon.com. The average user rating for this product is 3.7/5, compared to an average user rating of 3.8/5 for other Cell phones on Amazon.com. Reviewers are impressed by the reliability and portability. The performance and price also get good feedback. There are mixed views on the camera and durability. There are some critical comments about the size.

RIM might be struggling against the big Android and iOS competition with higher-end handhelds, but there still remains a strong BlackBerry contingent who wants that familiar keyboard feel that the Curve 3G 9300 offers. The recent RIM BlackBerry Curve...

The RIM BlackBerry Curve 3G 9300 is not too different from its predecessors, and remains a fairly basic smartphone.

The RIM BlackBerry Curve 3G 9300 is a decent entry-level BlackBerry with a couple of modern features like 3G and GPS, but we wish it was more affordable.

The RIM BlackBerry Curve 3G has a slim profile, a responsive optical trackpad, and external media keys. It also has Wi-Fi, stereo Bluetooth, GPS, 3G, and a 2-megapixel camera.

The RIM BlackBerry Curve 3G is almost identical to its predecessor save for a few changes. The photo quality is poor as well.

Though we're disappointed that the RIM BlackBerry Curve 3G didn't have more improvements over its predecessor, it's still a decent upgrade with the addition of 3G and GPS. Plus, it's quite affordable for an entry-level smartphone.

Affordable smartphone for the BlackBerry loyalist

Using a BlackBerry Curve 3G 9300 is like "visiting an old friend," InfoSyncWorld.com's Mike Perlman says. Other experts agree, noting that it's almost identical to its predecessor, the Curve 8530, save for some feature upgrades. Critics also agree that...

Find out all you need to know about RIM's latest BlackBerry Curve. The BlackBerry Curve 3G is an upgrade from the previously released 8520, it is similar in shape and size but now supports 3G as well. Read this article for more details.

The Curve 9300 is well worth its cost. When compared to many rivals and its predecessors it’s the best device. This BlackBerry phone handles email, instant messaging and social networking better than the others making it a youth’s number one choice but...

In this cell phone review, we will take a peak at RIM's BlackBerry Curve 3G 9300 and the LG Cosmos Touch.

The Curve 3G 9300 is a BlackBerry that remains true to its brand's build. This will obviously appeal to previous BlackBerry owners looking to upgrade their handsets. The phone's solid features and design make it a viable selection for those needing a...

The Blackberry Curve 3G (9300) is the much-awaited upgrade of the BlackBerry Curve 8520 which sorely lacks 3G. It even has the same price point as that of the Curve 8520 when it first came out. Hopefully, this review will give you an idea if it's worth...

The BlackBerry Curve 3G is an inexpensive consumer-oriented smartphone that uses the typical BlackBerry design and sports 3G wireless networking, Wi-Fi, and GPS. Shaun Mahal brings us this review.

Sluggish at times, Sub-standard camera, Touted as a 3G device, but really doesn’t take advantage of 3G network in any way

RIM (South East Asia) sat down today with the media, covering a wide range of topics from its plans for better distribution in Singapore, BlackBerry App World 2.0, BlackBerry 6 to the upcoming BlackBerry Curve 3G. Hit the jump for more details.

BlackBerry OS 5 is old; BlackBerry 6 may be too slow ; App World still not as good as rival shops ; Poor camera ; Not necessarily a better value

Design, the keyboard and the displayCurve veterans will get a strong sense of deja vu when they first pick up the new Curve. It's a blend of traits from earlier Curves; the keyboard is much like the one we've seen as far back as the Curve 8900,

Not only does the Curve add 3G (but apparently not HSDPA), but it also adds GPS, the new BlackBerry 6 operating system and 802.11n support to the existing WiFi interface. The feature set makes the previous generation Curve look quite primitive.. which...