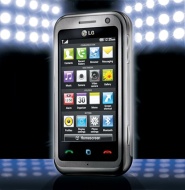 alaTest has collected and analyzed 47 reviews of LG ARENA. The average rating for this product is 3.2/5, compared to an average rating of 4.1/5 for other Cell phones for all reviews. Comments about the screen and design are generally positive. The durability and price are also mentioned favorably. There are some mixed opinions about the usability, and some have doubts about the apps and performance.

We analyzed user and expert ratings, product age and more factors. Compared to other Cell phones the LG ARENA is awarded an overall alaScore™ of 84/100 = Very good quality.

Below is a list of reviews for this or similar products. If you think this grouping is wrong please click here to flag.
Read more on our FAQ’s page.
Showing 1 - 10 of 29 Show Reviews: in English | in other languages (13)

Even if not featuring all these mind-blowing specs that Samsung OMNIA HD has, LG ARENA is also eagerly anticipated by many, because of its new S-CLASS 3D interface …

LG's flagship touch-screen mobile phone for 2009 is the Arena (KM900). It boasts HSDPA capabilities, extensive multimedia functions, Wi-Fi and built-in GPS, but it's the new 3D "S-Class" user interface that is the real talking point. According to LG,...

Slightly sluggish in some areas, keystroke lag when messaging, 3D cube isn't as intuitive or smooth as it could be, no App Store, TV-out cable not included ;

The LG Arena will be initially available from Vodafone for $0 upfront on a $69 or $79 plan over 24 months, with offers from Telstra and Optus to follow

Interface is confusing and can be laggy ; On-screen keyboard takes practice ; Buggy software and a few crashes

LG obviously knows that its touchscreen line of products needs a dedicated finger-friendly interface, but we don't think S-Class is as good as it could be. The interface can be sluggish, especially when the phone is full of data like media and...

The LG Arena is a touch screen smartphone which similar functionality to the Apple iPhone. It is 3G Internet enabled, has WiFi and multimedia capabilities.

LG is establishing itself as a maker of touchscreen handsets, and the Arena brings yet another tweak to that format. The tweak, to be honest, isn't on its own enough to sell this phone. Hailed as ...

The Arena is a very nice handset and it is really crammed with features. We wish LG hadn't bothered with the 3D cube interface, though.

The Arena is the start of a new era for LG. This mobile phone is extremely innovative, not only when it comes to its design, but also its features and user's ease. The LG KM900, or LG Arena, features a 5.0 Megapixel digital camera, GPS antenna, WiFi,...

With its new S-Class UI, the Arena boasts a slicker, more user-friendly touch performance than past LG touchphones. But not quite Apple cool.

Slim and eye-catching, the LG Arena has many attractive features. Its S-Class UI certainly raises LG's game - it's intuitive, easy on the eye and more user-friendly than LG's previous efforts - even if it's still not quite up to the iPhone's easy...

SanDisk Ultra 256GB MicroSDXC Verified for LG Arena...
Guaranteed and Certified by SanFlash™ for your LG Arena 2 SmartPhone! $89.00 TO SHOP