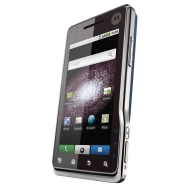 alaTest has collected and analyzed 300 reviews of Motorola MILESTONE XT720. The average rating for this product is 3.3/5, compared to an average rating of 4.1/5 for other Cell phones for all reviews. Views about the usability and size are generally positive. The screen and design are also mentioned favorably, whereas many are negative about the reception and portability.

We analyzed user and expert ratings, product age and more factors. Compared to other Cell phones the Motorola MILESTONE XT720 is awarded an overall alaScore™ of 85/100 = Very good quality.

Below is a list of reviews for this or similar products. If you think this grouping is wrong please click here to flag.
Read more on our FAQ’s page.
Showing 1 - 98 of 127 Show Reviews: in English | in other languages (159)

40% of the reviews on Amazon.co.uk give this product a positive rating.

alaTest has collected and analyzed 83 user reviews of Motorola MILESTONE XT720 from Amazon.com. The average user rating for this product is 3.2/5, compared to an average user rating of 3.8/5 for other Cell phones on Amazon.com. Views about the camera and screen are generally positive. The design and usability also get good comments. There are some negative opinions about the reliability. Opinions are divided on the portability.

66% of the reviews on Amazon.com give this product a positive rating.

The original MILESTONE was the lifeline by which Motorola pulled themselves out of their deathbed. And now the once ailing giant breathes again – but is in no mood to rest or make peace. Instead, it's breathing fire on the enemies.

No DivX or XviD video support ; No smart and voice dialing ; Somewhat clumsy camera interface ; GPS navigation app only offers a 60 day trial ; No Flash support for the web browser

The Motorola Milestone XT720 is the next-gen model of the original Milestone--the GSM version of the Motorola Droid . This time around, Moto ditched the slide-out keyboard to give the XT720 a sleeker design, and made other improvements, such as an...

The Milestone is sluggish at times. The camera has shutter lag, and picture quality could be better.

The Motorola Milestone XT720 is a full-featured and sleek Android smartphone, but it's rather underwhelming in the performance department.

Is it a mirror? Is it a reflective PCMCIA card? No, it's the Motorola MILESTONE XT720! Touted to be Motorola's camera-phone extraordinaire, this touch-screen phone mixes a traditional candy-bar form-factor with some interesting styling, a WVGA...

The Motorola Milestone XT720 is an excellent choice in the Android phone lineup. Its features include a 3.7 inch capacitive touchscreen display, 8 MP camera, 720 MHz processor and 512 MB RAM. Read more about the smartphone in the full review.

The Motorola XT720 is undoubtedly a very capable Android smartphone, especially if you are looking for a good camera. However, if you don't need the 8 MP camera, I would recommend the Samsung Galaxy S for its better display and video support. You could...

The XT720 was first announced as the MOTOROI for Korea and we were really excited about it. But it has been launched in the market when there are lots of faster Android phones out there.The multimedia aspects of the XT720 are worth appreciating but the...

The 3.7" 854 x 480 pixel display is the same as the one used in the DROID or Milestone and it is one of the most attractive features in the XT720. Compared to the rival HTC Desire, the XT720's TFT panel is a bit less bright, but it has a slightly...

The Motorola Milestone XT720 originally released in Korea as the Motorola 'Motoroi' which is now available to the US and Europe is Motorola's successful Droid , minus the QWERTY keyboard with the specs beefed up, plus a rather distinct 'bulge' you...

The XT720 features a capacitive 3.7" inch TFT-LCD display supporting multi-touch - great to go with the Android 2.1 Eclair it packs! An 8 megapixel camera with Geo-tagging, Xenon Flash and the capability to record at High Definition HD 720p, there's...

This camera-centric smartphone is a bit long in the tooth but still worth considering.

The Milestone impressed us, can its successor compete with the HTC Desire and iPhone 4?

Is there more to the Motorola Milestone XT720 than 720p video recording?

We've been waiting for the Motorola Milestone XT720 for absolutely ages. When we looked at the Motoroi back in February, we said it was launching in Korea and destined to come to Europe.

Motorola Video Baby Monitor - 2 Wide Angle HD...
✅ FULL ROOM COVERAGE - Our baby camera monitor comes with 2 portable cameras, which will give you a bird's... $160.00 TO SHOP

Motorola Baby Smart Video Baby Monitor with Wi-Fi...
Watch your child from anywhere in your home or while you are away from home. $79.00 TO SHOP

Zebra Symbol (Motorola) LI4278 Wireless Bluetooth...
Comes with one cradle and one USB cable $250.00 TO SHOP