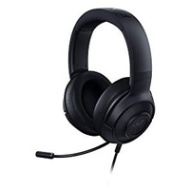 alaTest has collected and analyzed 9 reviews of Razer Kraken X. The average rating for this product is 3.7/5, compared to an average rating of 4.0/5 for other Headphones for all reviews. Reviewers really like the price and design. The comfort and portability are also mentioned favorably, whereas there are some critical views about the noise isolation and durability.

We analyzed user and expert ratings, product age and more factors. Compared to other Headphones the Razer Kraken X is awarded an overall alaScore™ of 88/100 = Very good quality.

Below is a list of reviews for this or similar products. If you think this grouping is wrong please click here to flag.
Read more on our FAQ’s page.
Showing 1 - 4 of 4 Show Reviews: in English | in other languages (3)

Razer Kraken X review: A no-frills take on a headset that had few frills to begin with

The Razer Kraken X is a budget version of a headset that was already considered entry-level to begin with. It's comfortable enough and sounds good enough for its $50 price tag, but most people are probably better off with the normal Kraken models.

Headband could use more padding ; Sound is "good enough" for a $50 headset and not much more ; Noisy microphone

Looking for an affordable yet practical gaming headset that looks great? Check out our Razer Kraken X review and see if this is the one for you.

+ Compatible with a wide variety of devices ; + 7.1 surround sound works surprisingly well ; + Punchy yet not overwhelming bass ; + Onboard controls ; + Comfortable to use ; + Affordable

Does this new headset live up to the Razer Kraken legacy?

Non-detachable mic ; Base audio is a little clunky

The X is a worthy addition to the Kraken range, and it impresses with that virtual 7.1 surround sound and low price. However, it drops the ball with a non-detachable mic.

Here at KitGuru we've reviewed plenty of Razer headsets over the years, with some costing as much as Razer products aren't usually cheap – but the Kraken X headset costs £49.99