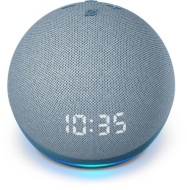 alaTest has collected and analyzed 18 reviews of Amazon Echo Dot (4th gen, 2020). The average rating for this product is 4.2/5, compared to an average rating of 4.3/5 for other products in the same category for all reviews. Comments about the size and sound are on the whole positive. The usability and price also get good feedback. Some have doubts about the bass quality.

We analyzed user and expert ratings, product age and more factors. Compared to other products in the same category the Amazon Echo Dot (4th gen, 2020) is awarded an overall alaScore™ of 98/100 = Excellent quality.

Below is a list of reviews for this or similar products. If you think this grouping is wrong please click here to flag.
Read more on our FAQ’s page.
Showing 1 - 10 of 17 Show Reviews: in English | in other languages (1)

Amazon's smallest smart speaker has undergone a radical change, so will the Echo Dot's (4th Gen) new design be enough to garner attention over the competition?

LED clock should be default

Alexa is getting a fresh wardrobe for 2020, and the new Echo Dot (4th Gen) is going spherical just like its bigger Echo sibling. As always, the pitch is fairly straightforward: at $49.99, the Echo …

Aside from its new spherical design, the revamped Echo Dot with Clock doesn't veer far from the original's winning formula.

Considerably taller than its predecessor

No question, the revamped Echo Dot with Clock looks radically different than its predecessor, and with its prominent yet tasteful LED display, this new clock-equipped Dot ups the ante as far as looks go.

The latest Echo Dot is technically the best Dot yet, but only by a narrow margin.

Somewhat bigger than its predecessor ; The discounted third-gen Echo Dot is significantly cheaper

There’s no question that the new Echo Dot is better than the third-gen Dot it’s replacing, but is it a better? Hmm. Yes, the fourth-gen Echo Dot has slightly better audio quality than its predecessor, but we’re not talking a knockout punch here. And...

Amazon Echo Dot (4th Gen) with Clock comes with the whole new sphere design that adds aesthetics to the room. Functionality wise, it is not much different from the previous generation so if you already have it, you may not need an upgrade unless you...

Currently, available at a special price of Rs 3299 in India, Echo Dot 4th Gen comes with a fresh design and improved internals. In this Echo Dot review, India Today Tech finds that it makes a compelling case for itself.

I can't help but begin this review by referencing the overused “new normal” terminology. Because, holed inside my house for the past eight months now, the smart speaker has suddenly become more useful. We use the Echo Spot in the kitchen for quickly...

The Amazon Echo Dot is one again the best smart speaker for less than $50, but the $60 Echo Dot with Clock is the better value.

But, I like the sphere for the Echo Dot with Clock, as it raises the display a bit and makes it easier to read. For my money, I’d opt for the Amazon Echo Dot with Clock; it’s just $10 more, but the addition of a clock makes it infinitely more useful.

The second Amazon Echo Dot with Clock ($60) is as useful as the first edition of the versatile Alexa smart speaker, plus the LED display looks great on the updated round profile.

While this second iteration of the Echo Dot with Clock isn’t much different from the first, the simple addition of a display makes the speaker a better device, not a more complicated one. If only all IoT companies sought to solve problems using the...

The fourth-gen Echo Dot is an improved performer all round

Nothing at this level

Considering which voice assistant to introduce to your home? The new Echo Dot is the most compelling and affordable case for choosing Alexa