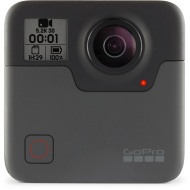 alaTest has collected and analyzed 25 reviews of GoPro Fusion (2017). The average rating for this product is 4.2/5, compared to an average rating of 4.0/5 for other Camcorders for all reviews. Views about the durability and design are generally positive. The image quality and usability are also mentioned favorably. Views are divided on the portability, and the reliability and size get critical opinions.

We analyzed user and expert ratings, product age and more factors. Compared to other Camcorders the GoPro Fusion (2017) is awarded an overall alaScore™ of 92/100 = Excellent quality.

Below is a list of reviews for this or similar products. If you think this grouping is wrong please click here to flag.
Read more on our FAQ’s page.
Showing 1 - 10 of 17 Show Reviews: in English | in other languages (8)

The GoPro Fusion elevates the bar for standalone 360 cameras.

Some features not available at launch ; More expensive than the competition ; Requires two MicroSD cards

Review: the GoPro Fusion is a different kind of action camera

Unlike most 360 cameras, the GoPro Fusion is designed to create both spherical and standard HD videos. If action/adventure is your game and your workflow is geared towards mobile and web, the Fusion may be the camera you're looking for.

The GoPro Fusion lets you do more with 360-degree video than other cameras, but its mobile software experience could use some refinement.

GoPro wasn't nearly first to the 360-degree camera space, but the Fusion breathes some life into the medium. Yes, there's the initial whizbang factor of 360, and VR in general, but is it sustainable? Like fads that have come and gone—3D, I'm looking at...

GoPro to launch Fusion 360 degree camera with WiFi : For over a year GoPro is teasing us with their new 360 camera. The company already released a video showing the capabilities of the 360 degree camera and started a pilot some months ago. But GoPro...

The folks over at 360 Rumors believe the GoPro Fusion 360 camera will make its debut somewhere around March 2018. We on the other hand believe the camera will arrive sooner and will most likely be presented at CES 2018 (January). Why we think this?

Just shy of a year ago GoPro announced initial details around their consumer-oriented 360° action camera, Fusion. But it wouldn't be until this past November that the company started shipping the $699 dual-lens unit. Since then I've been using the...

Spherical cameras seem to be one of the more undesired tech trends to be pushed on people in the past couple of years. Consumer tech companies have opted to develop these expensive products as a segue into capturing the user-generated VR vertical, but...

The software is where the Fusion has the most potential, but also where GoPro has the most to work on. GoPro’s much-hyped Overcapture feature, which allows you to capture more traditional windows inside the spherical content, is far too labor-intensive...

Transferring footage through the app is slow and fiddly ; Limited Android support for OverCapture ; Relatively expensive

The GoPro Fusion’s headline OverCapture mode lets you get some really creative video from your VR footage.

A neat 'over capture' feature allows converting 360 footage into regular widescreen videos, but time-consuming processing makes this one for professional content creators. Fusion is not about 360. With its over-capture allowing post-editing of...

GoPro Fusion review: The 360-degree camera you've been waiting for

Overall, the GoPro Fusion is a 360-degree camera that's stupidly simple to shoot with and capable of producing very impressive video. Its real win is

No OverCapture for Android (yet) ; It costs a lot ; Learning curve is steep if you've never shot 360 degree before ; Desktop solution is hard work

Overall, the GoPro Fusion is a 360-degree camera that's stupidly simple to shoot with and capable of producing very impressive video. Its real win is OverCapture, though, which on iPhone is utterly brilliant.